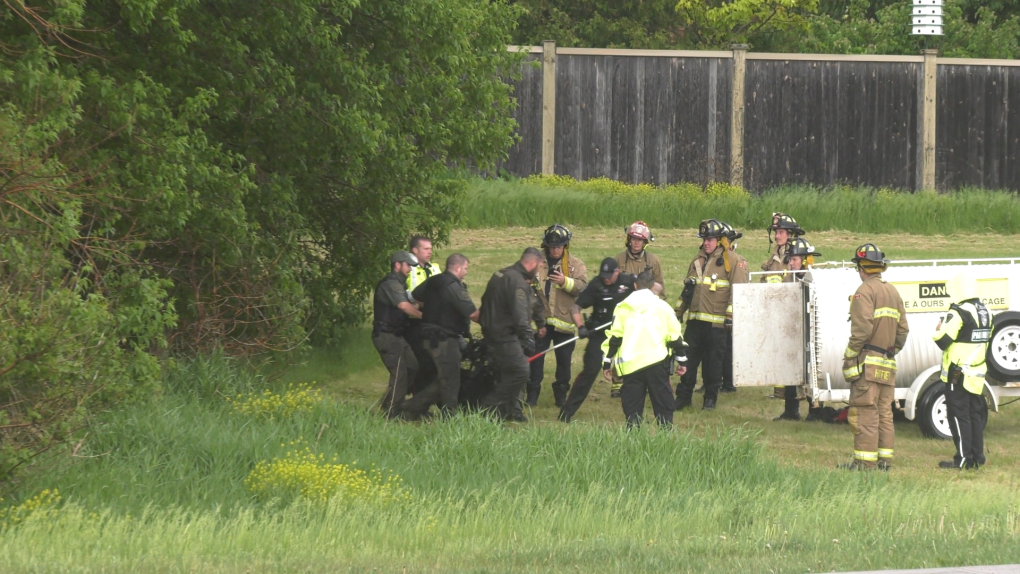 A bear was tranquilized after spending the afternoon in a tree along Terry Fox Drive. (Bryan McNab/CTV News Ottawa)

OTTAWA -- One day after a moose went for a dip in a south-end pool, a bear spent an afternoon in a tree in a Kanata neighbourhood.

Ottawa Police received calls at approximately 12:30 p.m. Saturday about the bear in the area of Terry Fox Drive and Kanata Avenue.

A witness told CTV News Ottawa the bear was initially spotted hanging on a hydro pole, and then wandered into a bunch of trees.

The bear was contained in a tree for several hours while Ottawa Police, National Capital Commission conservation officers and the Ministry of Natural Resources kept an eye on it.

Just before 6:30 p.m., conservation officers tranquilized the bear. It was placed in a cage for transport back to the woods.

In a statement to CTV News Ottawa before the bear was tranquilized, the National Capital Commission said, “Everyone is working together to get the bear down as safely as possible in order to hopefully relocate it in a natural environment.”

Despite a request from Ottawa Police and the NCC to stay away, a group of approximately 50 people watched the bear in the tree.

It is the second straight day wildlife have wandered into an Ottawa neighbourhood.

On Friday, Paul Koch woke up to find a moose taking a dip in his backyard pool near Hunt Club Road and Uplands Drive. The moose spent four hours in the pool before running out of the backyard and back into the woods nearby.

Black bear on a tree on Terry Fox and Kanata ave. Police and Natural Resources on site pic.twitter.com/mav9cmTL2y