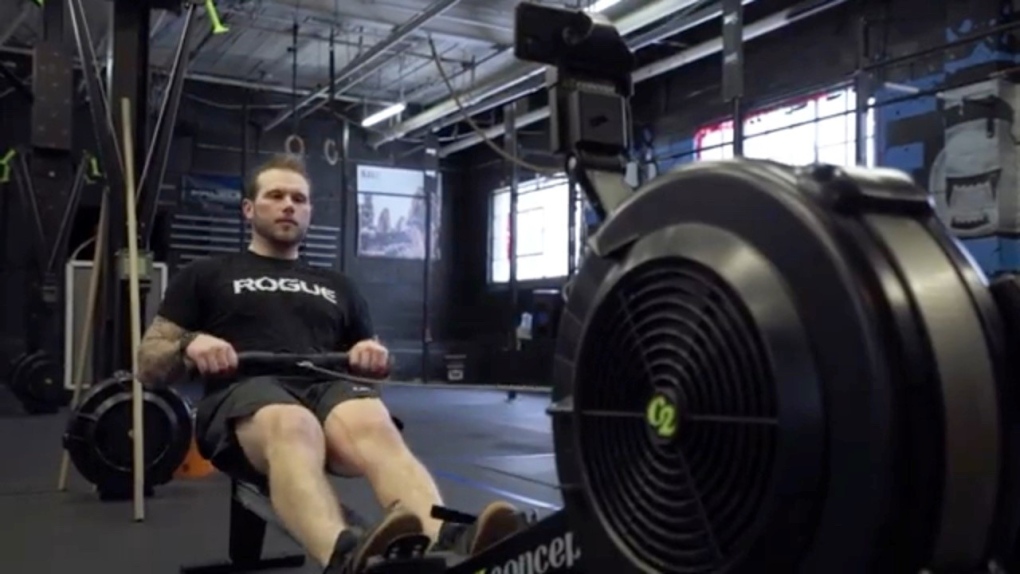 Conor Oakley is rowing a full marathon every day for a week for mental health awareness. (Photo taken from supplied YouTube video)

OTTAWA -- The global pandemic has been tough on a lot of people's mental health, especially during the lockdown. Now, one gym owner is doing his part to raise awareness and money towards the cause.

Conor Oakley owns Sweat Fit Co. in Hintonburg and he is putting his body through some of the toughest workouts he's ever done.

“When you get half way and you’ve been on there for an hour and 45 minutes, there’s nothing worse than realizing you’re half way,” said Oakley. “It’s three and a half hours minimum on the rower and 50 per cent said it wasn’t possible. So, right then I’m like, I’m doing this.”

He's been doing a full marathon—42.2 kilometres—on a rowing machine every day for the past week.

“Today’s day seven and my hands are destroyed,” said Oakley.

He wanted to do more than just raise awareness, so he also started a GoFundMe page to help raise money for the Royal Ottawa Mental Health Centre.

“I found as a small business owner, and communicating with a lot of my members, that a lot more people than I realized were struggling with mental health issues,” said Oakley. “Even myself, I’ve found a times during the isolation, falling down that path of just not being in the best headspace.”

Omar Kanan is a trainer at Oakley’s gym. He participated in the three and a half hour marathon on day one. On Saturday, he joined Oakley again for the final push.

“Honestly this just shows that you can do anything that you set your mind to,” Kanan said. “And it's good to have that support system all the time. That is what this gym, and this community, is all about.”

Dr. Sam Hetz is a member of Sweat Fit Co. and a family physician. He donated to Oakley’s cause and said he knows how important exercise is for mental health.

“We know that exercise is one of the really important ways to actually help people's mood,” said Hetz. “There’s a direct correlation between exercise and mood. And so it's a great cause, not only to build awareness to mental health, but also to donate to a great cause for The Royal Ottawa.”

When Oakley started this journey seven days ago, he had no idea it would gain as much momentum as it has. Donations surpassed his expectations, even on the first day.

“I was hopeful for $500 to be raised,” Oakley said, “and the fact that people I don’t even know and people are honestly donating—I can’t even fathom it.”

So far, he has raised more than $2,000 for mental health. The fundraiser will close on Monday.