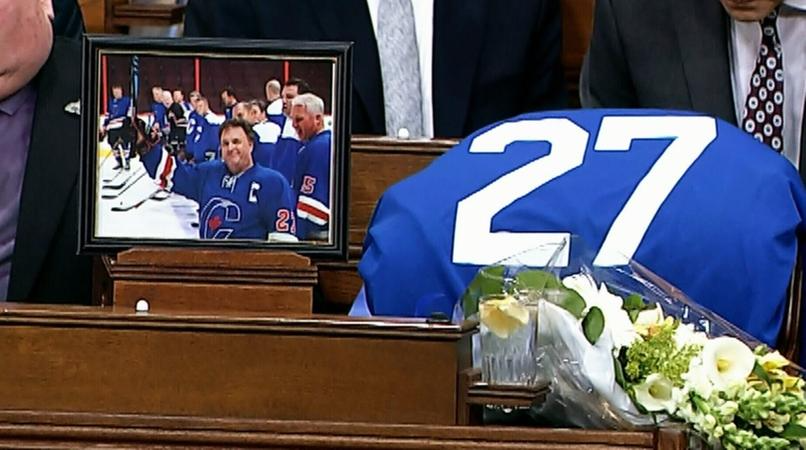 A tribute to late Conservative MP Gord Brown adorns his seat in the House of Commons. (CTV News)

Shock and sadness continue Thursday morning as the riding of Leeds-Grenville-Thousand Islands and Rideau Lakes continues to mourn the loss of MP Gord Brown.

He leaves behind his wife Claudine and two sons.

Conservative MPP Steve Clark says he had just spoken to his friend on the phone the night before his passing.

"We talked about politics from the time we were younger," says Clark on 104.9 JR FM, The Bruce Wylie Show with Kimberley Johnson. "To look back on Gord's career, all the things he's been able to do, not just for the riding but the respect he had for his colleague’s and the fact that he could work across party lines, he was a pretty remarkable representative for our riding, and he was a great friend.

"We would go out for a charity hockey game, or we would go out Friday mornings at the Memorial Centre, and we'd always joke about how we all wanted to play right-wing," says Clark. "Little joke like that. I'm going to miss him."

Tom Russell, with the 1000 Islands Development Corporation, a group Brown worked closely with to secure federal funding for the Eastern Ontario region, says the group is facing "profound sadness."

"His impact on our corporation and on our community is both immeasurable and unparalleled. May his family and friends find comfort in the knowledge that his legacy will be felt for generations to come."

Brown got his start in politics as a town councillor in Gananoque, an area he never left behind despite his work on Parliament Hill.

"His passion just pulled all the former players in to Leeds-Grenville, because he just spent all his time going out and supporting the community."

Leeds and the Thousand Islands Mayor Joe Baptista says he was a mentor.

"I could always pick up the phone and bounce anything off of him." says Baptista. "He always took the time to listen, he would always take the time to get back to you, I'm just in such shock right now."

"Speaking as a mayor he was always there whenever we needed him," he says. "He was always at every event, he did so much work, just in recent weeks he was in the far east, he was in Washington, LA, he worked so hard for the riding.

"I can't believe I'll never talk to him again."