Kingston pub dropping reference to John A. Macdonald from its name 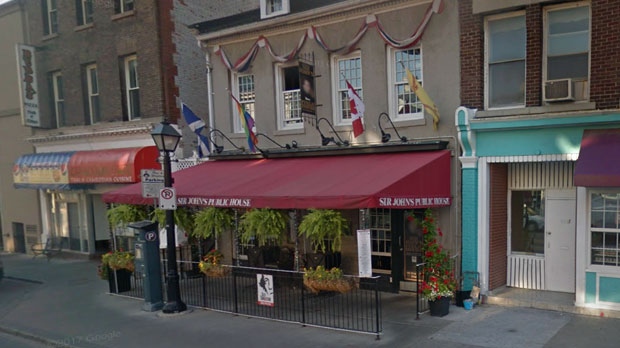 The Scottish pub in Kingston, Ont., once known as "Sir John's Public House," will now be called "The Public House." (Google Street View)

A pub in a building where Sir John A. Macdonald once had his law office is dropping a reference to Canada's first prime minister from its name after receiving requests to do so from members of the Indigenous community.

The Scottish pub in Kingston, Ont., once known as "Sir John's Public House," will now be called "The Public House," its owner said, noting that a new sign was being erected Tuesday.

The building housed Macdonald's law office from 1849 to 1860, Fortier said.

"I bought this building about seven years ago, and at that time it was an Italian pizzeria. And I thought, 'what a wonderful opportunity to celebrate John A. Macdonald's life,"' he said. "We have a Scottish pub, and we all know that Sir John enjoyed a few drinks, and what a great idea to have his former law office as a pub."

In August, the Elementary Teachers' Federation of Ontario called for the removal of Macdonald's name from elementary schools in the province, referring to him as the "architect of genocide against Indigenous Peoples." That call was rejected by Ontario's premier, who noted the need to understand all parts of the country's history.

The following month, a group of people protested outside Fortier's restaurant.

"Some of our customers and some of the native organizations in the Kingston area said that they could no longer do business with us. They said that it was no longer a safe place for them, and that the name 'Sir John's' just brought back too many unhappy memories for their communities," Fortier said.

After much consideration, Fortier said he and a group of managers decided to change the pub's name.

"The name that we selected was just a truncated version of the original," he said.

Fortier noted, however, that there will still be exhibits and memorabilia related to the prime minister in the pub.

"We can't deny the fact that John A. Macdonald occupied this building from 1849 to 1860. That's a historical fact. I can't erase that," he said. "I hope these communities will recognize that in the spirit of reconciliation, we are taking action to make them feel more welcome than they would otherwise have felt."