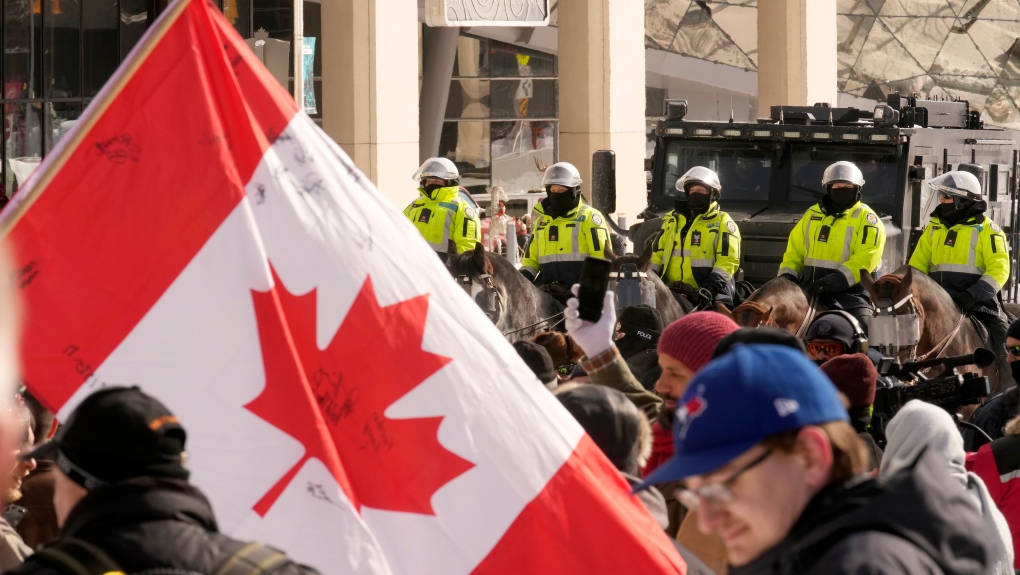 Mounted units form a line as police work to bring a protest, which started in opposition to mandatory COVID-19 vaccine mandates and grew into a broader anti-government demonstration and occupation, to an end, in Ottawa, Friday, Feb. 18, 2022. THE CANADIAN PRESS/Adrian Wyld

The Ottawa Police Service says the federal government will cover all policing costs incurred during the “Freedom Convoy” demonstration in downtown Ottawa this winter.

The price tag for the Ottawa police response to the three-and-a-half-week occupation of downtown Ottawa was approximately $35 million, including money for the RCMP deployment.

In a report for Monday’s Ottawa Police Services Board meeting, staff say the federal government will cover the costs incurred during the demonstration.

“The OPS has been informed by the federal government that it will receive additional funding through its National Capital Extraordinary Policing Costs program to offset all costs incurred by the OPS due to the occupation,” the report says.

“From the onset of the demonstration and to this day our partners at Public Safety Canada have advised us that we can expect to recover all direct costs related to the demonstration in accordance with the Terms and Conditions of the National Capital Extraordinary Policing Contract,” Dunker said in a statement. “The submission deadline for those costs is July 2022 with reimbursement expected thereafter.”

City Manager Steve Kanellakos said last month that city staff and Ottawa police have been in talks with federal and provincial governments for funding to cover the police and municipal costs associated with the “Freedom Convoy" protest.

Ottawa police received assistance from the RCMP, OPP and several municipal police forces during the demonstration and the operation to remove the “Freedom Convoy” from downtown streets.

A spokesperson for Public Safety Minister Marco Mendicino tells CTV News Ottawa the federal government is waiting for the city to submit a final bill for the protest.

"We recognize that the illegal occupation caused a serious financial burden for the City of Ottawa - beyond what is covered by existing authorities and programs - and we’re committed to helping them address it," said Alexander Cohen, Director of Communications for the Public Safety Minister.

"Since end of the occupation, we have been in close touch with the City to determine the total costs of the situation. A final request from the City has not yet been sent. We look forward to receiving it, and continuing to work closely together."

The Ottawa Police Service is now taking a more “robust approach” to the planning and deployment of officers for special events following the “Freedom Convoy” demonstration, which will result in increased cost for the service.

There are currently 100 known events planned for Ottawa this year, including one-day events and multi-day events such as Canada Day and the Royal Visit.

“The OPS is building out its Special Events team to have the capacity to meet the workload demand and support its ability to plan and manage events and demonstrations,” says the report for Monday’s board meeting.

“This includes taking a more robust approach to the planning and deployment of police, and surge and sustain capacity to ensure the community is safe and the city remains open.”

The report says lessons learned from the “Freedom Convoy” demonstration means “increased planning and surge capacity posture” will be required for all events, which could hurt the service’s quest to find $7 million in efficiencies this year.

The Ottawa Police Service is now budgeting an extra $2 million to $3 million for overtime to cover policing events and demonstrations.