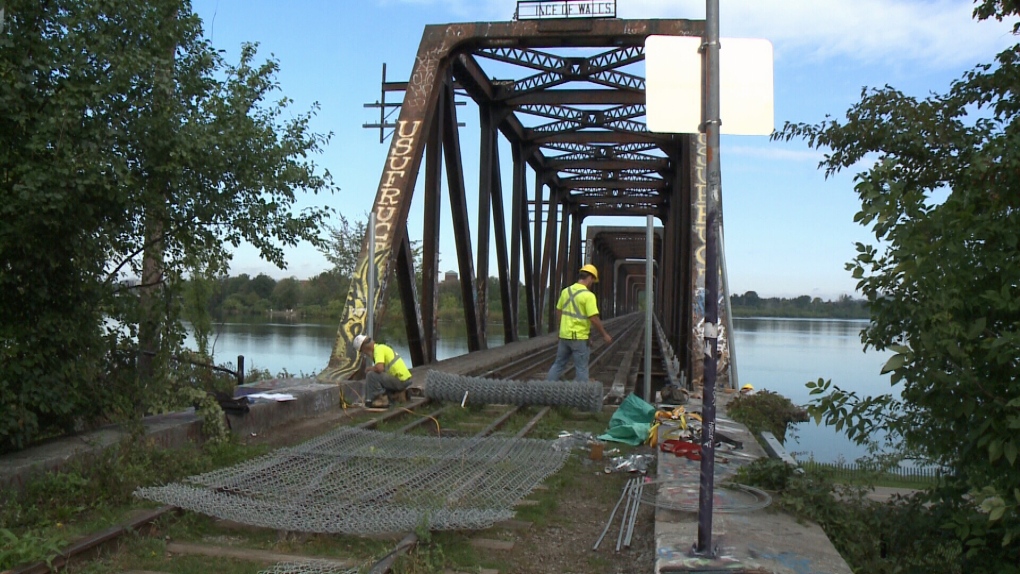 City of Ottawa workers erect a chain link fence on the Prince of Wales bridge on Tuesday, Sept. 20, 2016. (CTV Ottawa)

The Canadian Transportation Agency has ordered the City of Ottawa to either make it so that trains can run across the Prince of Wales Bridge by next year or undergo the full process to legally discontinue the Ottawa River rail line.

This comes after the City landed in hot water with the CTA last year when it tore up a section of rail line to make way for the new Bayview LRT station.

According to a determination by the CTA, the City said it was not planning on discontinuing the line, but it would take two to three years to reroute it around Bayview and have the bridge equipped to allow trains to cross it again.

The CTA found the City’s timeline unreasonable and asked for a faster one. The CTA says the City refused to commit to an expedited timeline, and accused the agency of overstepping its jurisdiction.

The CTA maintains that the Ottawa River Line falls under its purview because it is owned by a federally-regulated railway company (in this case, The City of Ottawa) and that the City did not follow the proper procedures to legally discontinue the line when it placed a permanent structure on top of part of it.

The City now has until April 30, 2018 to either explain how it will make the Ottawa River Line and the Prince of Wales Bridge train-ready in 12 months or begin and complete the process of discontinuing the line, which involves trying to sell it and then offering it to the government if no one buys it.

In a memo to City Council and the Transit Commission, City Solicitor Rick O’Connor says a review of the City’s options will be undertaken.

“Given the considerable costs associated with returning the line and the Prince of Wales Bridge to a state where trains could operate over it within a period of 12 months, and in the absence of a request from any currently viable railway operation, Legal Services, in consultation with the Transportation Services Department and its external rail experts, will be reviewing the decision over the coming days” O’Connor said. “That review is intended to inform a recommendation as to the next steps to be taken in this matter, which may include a request for judicial review.”