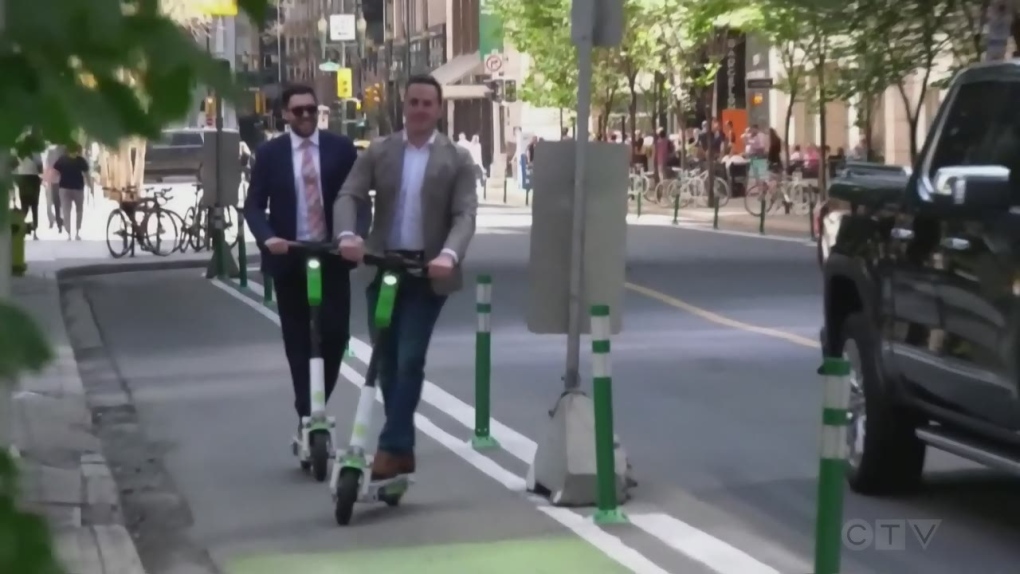 OTTAWA -- More e-scooters could be available to rent in more locations across Ottawa this spring and summer, as the city of Ottawa looks to increase the fleet for the second year of an electric scooter pilot project.

A report for the Transportation Committee recommends continuing the program, allowing three e-scooter companies to rent e-scooters between April 15 and Oct. 31.

"The new fleet size takes into consideration e-scooter demand during the peak summer season, issue management considerations, the desire for a wider central deployment area, and the opportunity for satellite operations outside the Greenbelt," says the report for Wednesday's Transportation Committee meeting.

"During August and September, high demand for e-scooters could not always be met by the existing fleet."

Staff recommend expanding the pilot project for e-scooters outside of the Greenbelt, with 300 of the 1,200 to 1,500 scooters deployed in the suburbs.

"In addition to residents requesting a larger deployment area, some BIAs also requested e-scooters," said the report for the Transportation Committee, adding the Kanata North Business Area and the Quartier Vanier said they were interested in having e-scooters in the areas.

Last summer, more than 72,720 unique riders took more than 238,000 rides on e-scooters between July 16 and Oct. 31.  Bird Canada, Lime and Roll were permitted to rent scooters to users across Ottawa.

The city approved the pilot project for electric kick scooters after the Ontario government gave municipalities the green light to allow e-scooters in the cities.

Besides expanding the e-scooter pilot project outside of the Greenbelt, there will be new restrictions on the scooters in the ByWard Market.

The report says increased trips to the ByWard Market in the summer led to complaints from residents and business owners about "inconsiderate and dangerous e-scooter riding."  Staff recommend allowing e-scooters on York Street as a thruway through the market, and using geofencing technology to keep the rest of the market as a pedestrian space.

Data collected by the city shows in 2020, e-scooter trips ranged from less than one kilometre to more than 10 kilometres, with the average trip length 1.9 kilometres. The ByWard Market, Elgin Street and on Bank Street were popular destinations for trips on the e-scooters.

Ottawa's Electric Kick Scooter Bylaw states no person shall operate an electric kick-scooter on a sidewalk or on a road with a speed limit greater than 50 kilometres per hour.