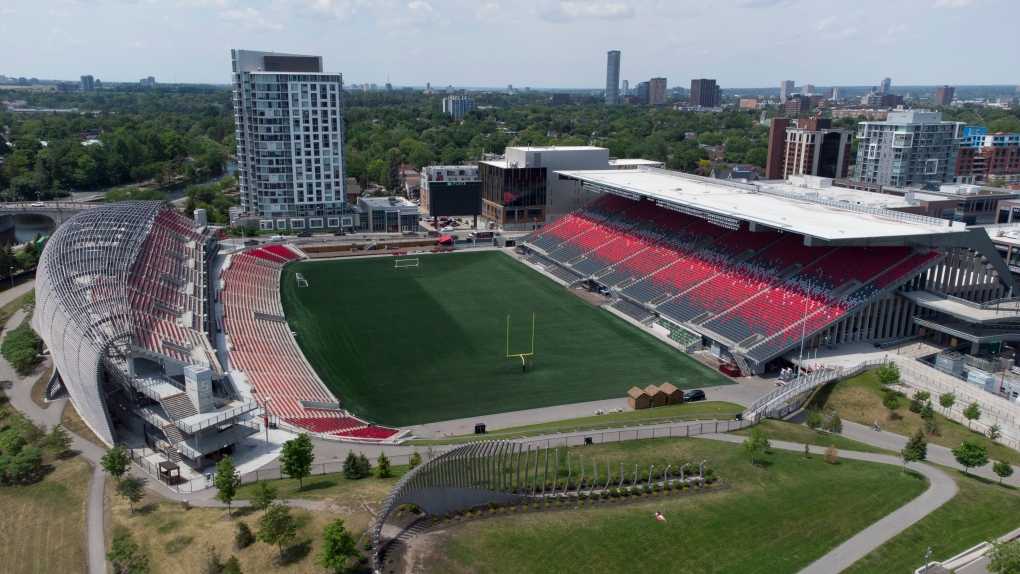 In this photo taken using a drone, TD Place is seen in Ottawa Wednesday, June 2, 2021 in Ottawa. Located at Lansdowne Park, TD Place is the home of the Ottawa REDBLACKS CFL team. (Adrian Wyld /THE CANADIAN PRESS)

OTTAWA -- Defensive lineman Chris Larsen, who denies any involvement in an alleged homophobic attack on Toronto Island earlier this month, was one of six players released by the Ottawa Redblacks Thursday.

In a statement, the Ottawa Redblacks say, “today’s releases were player personnel decisions as part of our yearly process to bring the roster down to the allowable limit prior to the start of training camp.”

Larsen, 25, was previously accused on social media of allegedly playing a role in a homophobic attack June 5. On June 9, The Ottawa Redblacks announced Larsen was suspended from the team.

On June 16, Larsen stood next to his lawyer, Calvin Barry, to explain that he was only a witness to the incident.

"Police headquarters determined that he didn't do anything to this gentleman and he is no longer a suspect," Barry had said. "The origin of suspect came from what was launched on social media when they didn't have all the facts."

As for the alleged incident, Toronto Police said Thursday it remains an active investigation, adding that officers have never named any person of interest.

“We would not speculate on those alleged to be involved, or not involved, until charges have been laid and investigators have established the full facts with evidence to support it.”

The charges against both suspects have not been proven in court.