She is the biggest name in Canadian golf, but Brooke Henderson proved you can go home again, returning to the Smiths Falls school she attended as a child to speak with students and receive a very special honour.

As Henderson walked into the Chimo Public School gymnasium, she was greeted with a standing ovation, with students smiling and cheering, knowing this superstar was once one of them.

"These kids are young and they have a life full of possibilities and I just want them to be able to find something that they love to do," Henderson said.

The event was organized by Skechers Canada, who Brooke has been a partner with for six years.

Students were able to ask her questions, including how she handles her nerves, and what it felt like to play in the Olympics.

Even better, a select few got some tips on putting from a 12-time LPGA winner. 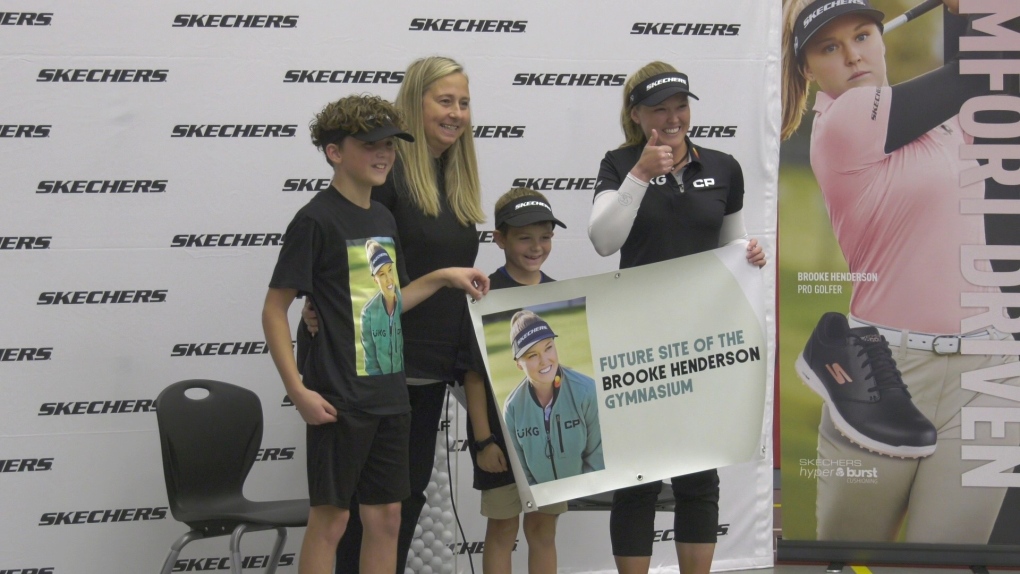 "This is Brooke Henderson; this is a really big deal for our community and also for our students seeing the roots that she's come from and how far she has gone," Chimo Principal Sherrie Guthrie said.

"It's an inspiration to both male and female athletes. It's actually an inspiration to all athletes and being one of the best golfers in the world, especially in our hearts, it's just so important to see where we can come and go, from Chimo," Guthrie added.

Approximately 50 students from Kindergarten to Grade 8 took part in the meet and greet, after responding to a school survey.

"They were asked a couple of questions; do you enjoy golf? Who is your favourite golfer? And would you like to attend a golf clinic?" Guthrie said. "If they answered in the affirmative, not really knowing why they were answering the survey, then they were invited to attend this event."

While the school and Skechers tried to keep it a secret, rumours were swirling around the halls that Henderson would be the special guest.

Henderson attended Chimo from Grades 5 to 8. The school, also surprising her for being such a great role model, by dedicating the gymnasium after her.

"That's so cool! It was a big surprise!" Henderson said. "I loved going to school and I loved learning, but I loved this gym and gym class and playing all the different sports." 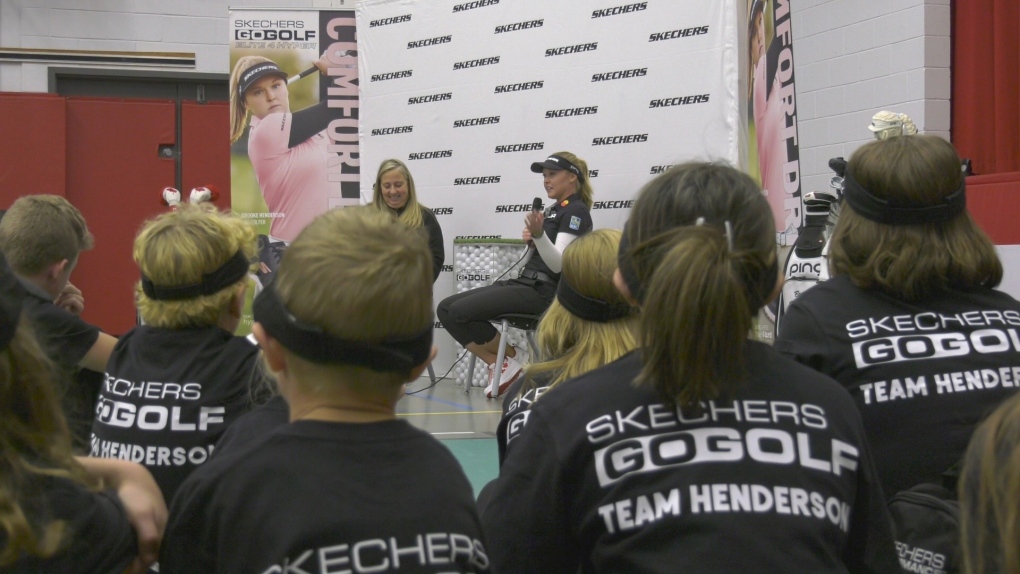 Students who attended, now knowing they can go on to do big things if they put their mind to it.

"I think it was kind of cool to meet somebody that used to come to this school and be here in the same place as me," said Grade 6 student Oliver Krotki.

"It's so amazing to just finally see someone that is just like me. And I'm just very happy," added Grade 7 student Piper Rudge.

"There's just so many opportunities and I'm really excited for them," Henderson said.

"Today, it's a welcome back, it's a thank you," said Guthrie. "I'm excited for my students to see somebody who has had such great successes and that they can come from Chimo and be able to reach for their dreams and achieve them."

"If they feel they don't have a pathway to success, you can look at Brooke and see that pathway," she added. 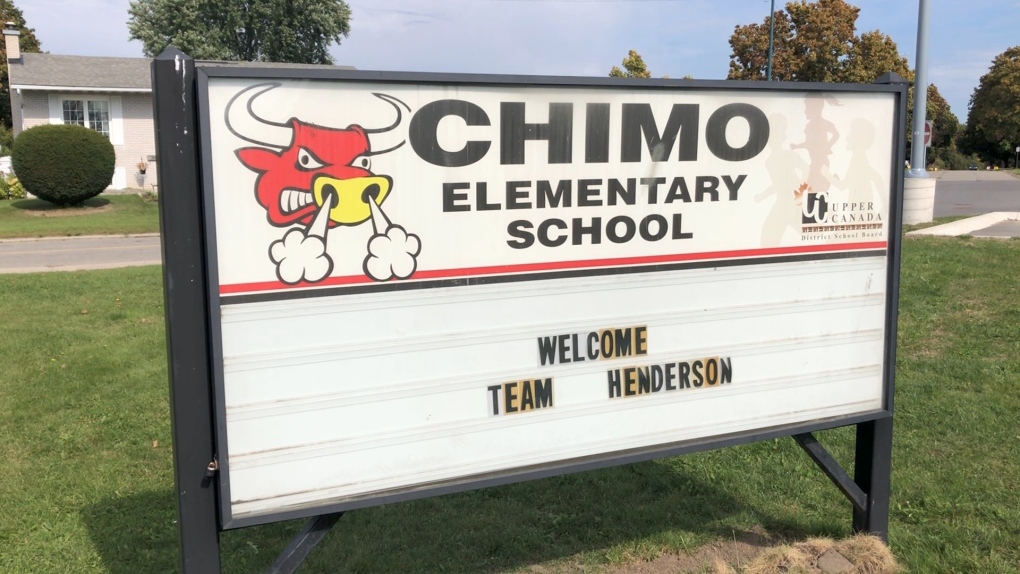 Skechers Canada also delivered $5,000 to the Upper Canada District School Board for the Champions 4 Kids Foundation, which assists families in need with sports activities, medical expenses and gas cards to parents with a child in the hospital.

"Brooke is great with the kids, she loves the youth and promoting the game of golf to the youth," said Skechers Canada Marketing Manager Cris Alcantara.

"Brooke is an excellent example of what you can achieve even at the local level, to bring it to national heights and to international heights, so getting them young, teaching them about the game is very important," he added.

Henderson spoke with students after the event, taking selfies and signing autographs. Her family also attended, along with former teachers.

"This is an amazing day," she said. "I have so many amazing memories from this school and I loved all my teachers and I made so many friends here, so this was a great place early on in my life and I'm just excited to be back here with all these students." 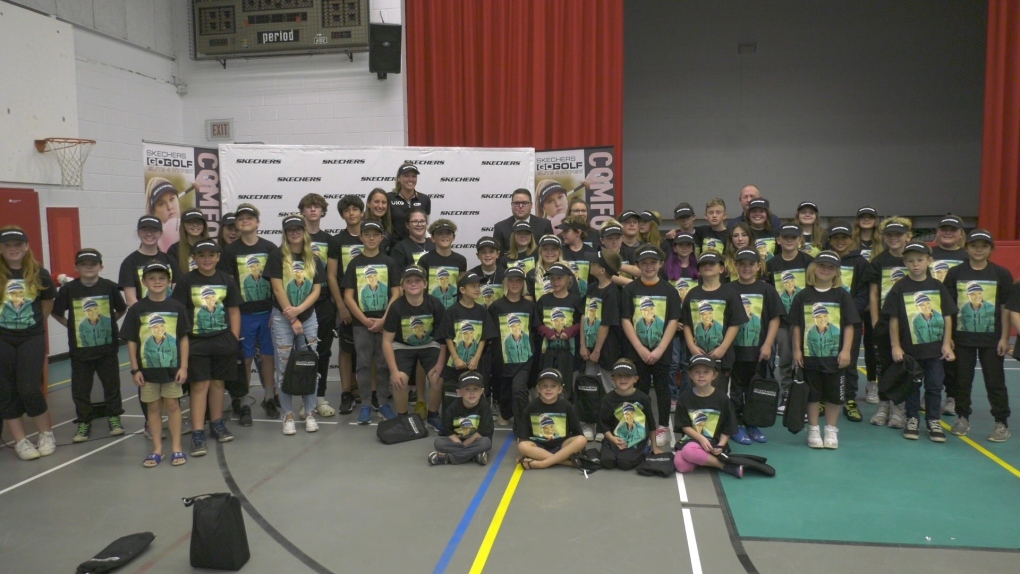 "It really means a lot to me that they would think that highly of me and I just thank everybody that was involved (for the dedication)."

A ceremony is scheduled in 2023 for the official reveal of the Brooke Henderson Gymnasium.