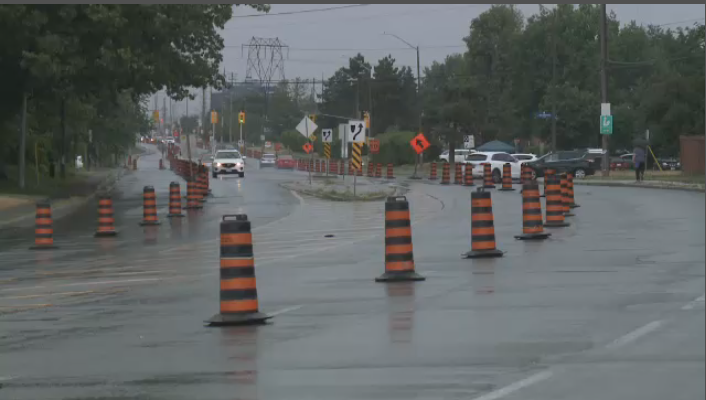 Drivers may have noticed a slowdown on Moodie Drive Sunday but it wasn’t because of construction.

A pop-up bike lane closed two lanes of traffic, one in each direction, from Moodie Drive south of Robertson Road and north of Seyton Drive from 10- 4 Sunday. The makeshift bike lane was created out of pylons as a way for frustrated cyclists to prove a point to the city.

“The pylons are a temporary barrier to create a safe space on the road for people to bike,” said organizer Trevor Haché, vice president of the Healthy Transportation Coalition.

About 40 people came out to hand a petition with more than 500 signatures to area councilor Rick Chiarelli. The petition asks the city to consider creating segregated bike lane in Moodie Drive in Bells Corners and to reduce the speed limit from 60 km/h to 50 km/h in that community. Volunteers were also stationed along the roughly 1 km route to take the pulse of the community.

“It’s one of those chicken and the egg things. You aren’t going to see a lot of cyclists if there aren’t safe places to bike,” Haché said. “The very confident cyclists will bike on the road with a lot of speeding traffic on it, but you’re not going to get your average person biking on that road."

The group wants a segregated bike lane through Bells Corners on Moodie Drive. They say the paved area between the road and the sidewalk is an ideal spot for a lane. Creating a safe space for cyclists is one way the residents hope to encourage more people to cycle, especially with LRT coming to Moodie Drive in phase two.

But finding funding for a project like that could be a challenge. The Ford government's decision to end the cap-and-trade system means the cancellation of a designated municipal cycling infrastructure fund that Ottawa and other cities relied on. 12 Ottawa proposed projects that budgeted for that provincial funding are in limbo.

Councillor Chiarelli says he will bring up that change when he meets with the area's new MPP Jeremy Roberts next week.

As for the project itself, Chiarelli said that while he will talk to other councillors about the proposal, the needs of drivers in the area must also be taken into consideration.

"If we achieve our wildest dreams on a modal split, and we have people biking and taking the bus, still we have 65% of people will be driving cars so we have to serve them too and we can't loose track of that," he said.