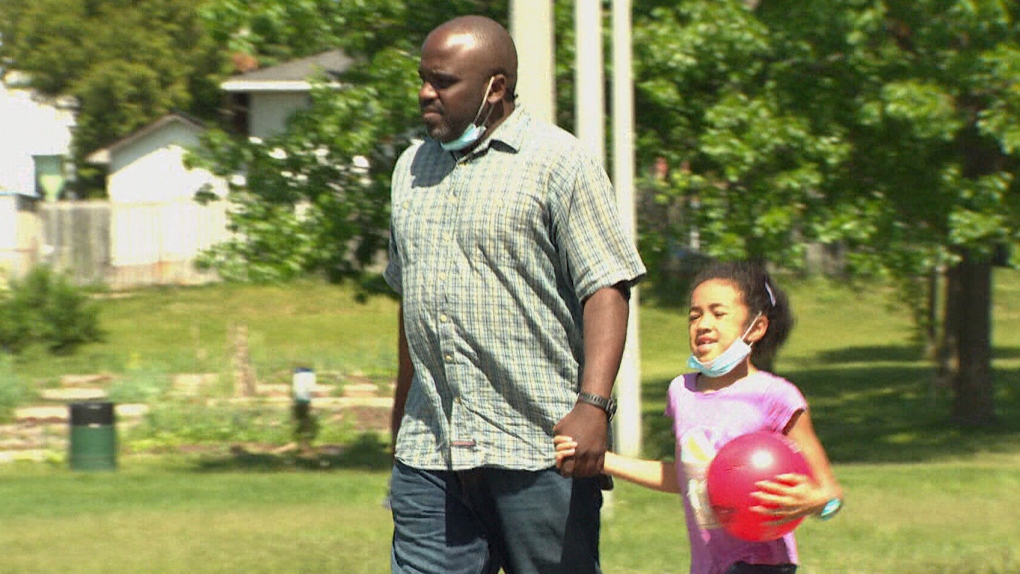 Obi Ifedi is seen in this image with his daughter.

OTTAWA -- An Ottawa Bylaw Services officer has been fired after punching a Black man while issuing a ticket in a City of Ottawa park this spring during the COVID-19 pandemic.

After conducting an investigation into the incident, Emergency and Protective Services general manager Anthony Di Monte says staff concluded, "that the Bylaw officer engaged in an excessive use of force in the altercation."

"While this is an isolated incident and there is no pattern of this behaviour, an assault against a member of the public in the course of duty is very serious," Di Monte said in a memo to council. "The Bylaw officer’s employment with the City of Ottawa has been terminated."

Obi Ifedi told CTV News that back in early April, he was punched in the face by a bylaw officer who had been trying to give him a ticket for being one of several people in a Michele Heights park. The City of Ottawa had closed all municipal parks to encourage physical distancing during the COVID-19 pandemic, except for walking through.

Ottawa police told Ifedi they had investigated and confirmed the Bylaw officer punched him, but there would be no criminal charges. Instead, a pre-charge diversion would be ordered, which typically includes counselling or community service.

In a memo to Council Friday afternoon, Di Monte provided an update on the Ottawa Bylaw and Regulatory Services investigation into the incident involving the Bylaw officer and a member of the public on April 4, 2020 near Marlene Catterall Park on Michele Drive.

"In reviewing the individual accounts of what took place on April 4, 2020, there is no dispute that the Bylaw officer struck the member of the public," writes Di Monte.

"All Bylaw Enforcement Officers receiving training on the 'Use of Force' focused on ensuring officer safety and de-escalation techniques. In review of the specific circumstances of the incident, and given the existing training curriculum provided to Bylaw officers, BLRS' investigation concluded that the Bylaw officer engaged in an excessive use of force in the altercation."

The Bylaw officer had been placed on administrative leave while Ottawa Bylaw and Regulatory Services conducted an investigation.

Di Monte says the city will not provide any further comment on the case.