OTTAWA -- A twenty-fourth councillor could be sitting at the council horseshoe at Ottawa City Hall after the 2022 municipal election.

The Ottawa Ward Boundary Review 2020 recommends redrawing Ottawa's ward boundaries to address population growth, and adding a 24th ward in time for the next election.

There are currently 23 wards in Ottawa.

The Finance and Economic Development Committee will debate the recommendations on Dec. 1 to establish a new ward boundary structure composed of 24 wards, along with a mayor. There would be 12 urban wards, nine suburban wards and three rural wards.

In 2019, Council approved a process to review the ward boundaries. The City of Ottawa retained an independent consultant team to conduct the ward boundary review, which includes consultations with residents, communities, stakeholders and current members of council.

In June, the consultant team brought forward an options report, with five options for realigning Ottawa's ward boundaries. The options were:

In July, Council requested a sixth option be developed for the second round of public consultations, addressing population growth in Barrhaven, Cumberland and Gloucester South Nepean.  The sixth option would recommend increasing the number of wards to 24, with 12 urban wards, nine suburban wards and three rural wards – and would minimize ward boundary changes.

In a report for the Finance and Economic Development Committee's meeting on Dec. 1, staff say the consultant team recommended a modified version of the sixth option.

"Option six was favoured by both the public and members of council and became the preferred option. Several suggestions for boundary changes to option six have been incorporated into the recommended ward boundary configuration."

A report from the consultants said "Option six maintains effective representation while minimizing change to the current ward configuration." 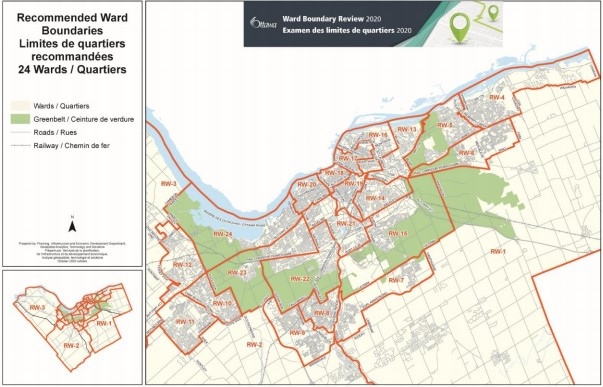 The report from the consultants says, "Most wards have not changed. Changed ward boundaries, where they occur, primarily address rapid growth."

You can view all the proposed new wards on the city's website.

In a letter to constituents on Sunday, Councillor Jeff Leiper noted the recommended new boundary between Bay and Kitchissippi would be Denbury, with the apartment towers west of Dominion and north of Richmond included in Bay. Westgate would be included in River ward.

Adding a new ward to the City of Ottawa would include an estimated one-time cost of $100,000, as well as ongoing costs estimated to be $492,000 a year. The $492,000 a year includes the salary and benefits for new councillor, along with an office budget.

If the Finance and Economic Development Committee and Council approve the proposal for a new ward, the city hopes the new boundaries will be in place for the 2022 municipal elections.