An operation is currently underway to right that overturned crane.  A large crawler crane toppled over yesterday at the LRT site on Waller Street.  The operator managed to jump to safety but the incident has halted work at that spot.  Progress is slow when you're trying to lift a 40-thousand kilogram crane.

It is tricky, too, given it's over top of the LRT tunnel.  So, the procedure to lift the crane could take until midnight.

How many cranes does it take to set another crane upright? That would make a good joke but nobody is laughing at the LRT site on Waller Street.

“I find it amazing this actually happened,” says Rick Moll as he walks by the scene.

It happened Wednesday around 9:30 when a crawler crane was lowering a concrete mixer into the tunnel.  The Rideau Transit Group helping build the LRT says the stabilizers on the crane had not been deployed.  The operator jumped to safety as the crane toppled over.

So, today, three cranes were mobilized to set one crane back upright.  The Ministry of Labour is on the scene, conducting an investigation into this mishap.

Leonard Poole is here, too.  He's retired and figures this beats mall walking any day.

“I came down to check it out,” he says, with his camera in hand, “What’s my advice on setting it back upright?  Well, I’m not an engineer.”

Oddly enough, the man standing beside him is and offers his advice on what to do.

A college in Morrisburg that trains crane operators says a crane overturn is unusual but it happens.  Harold McBride with the Operating Engineers Training Institute of Ontario says the first step will be removing the boom.

“They would lift the boom off or hook it off the crawler crane,” McBride explained over the phone, “and set it back up in its original position.”

Rideau Transit Group met with labor leaders this morning to talk about this incident.  Sean McKenny, the President of the Ottawa and District Labour Council says it was a productive meeting.

“It won't change overnight,” McKenny says, “It is going to take time and the hope is there is seriousness by Rideau Transit Group and others to provide that safety the workers are looking for.”

Ironically, the day before the crane toppled, paramedics and firefighters were at the same spot, conducting an emergency exercise, lifting a stretcher from the tunnel. It wasn't with that same crane though; they were using their own aerial ladder truck. 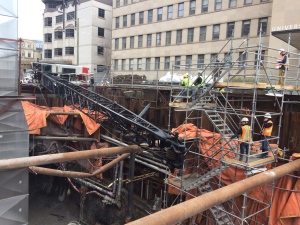