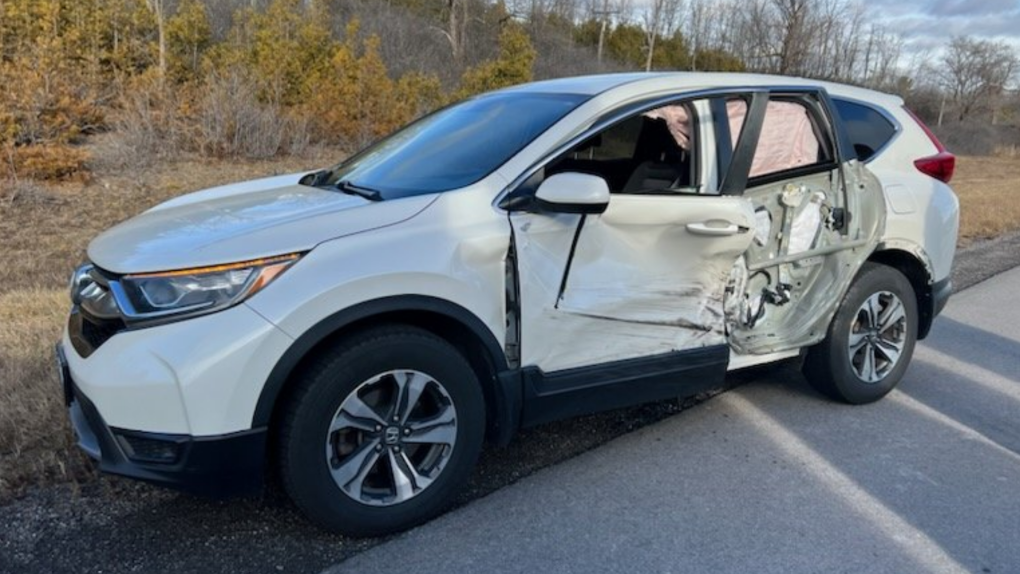 A driver was injured when the wheel of a tractor trailer came loose on Highway 401 and struck this vehicle Sunday, Dec. 4, 2022. (OPP/Twitter)

Ontario Provincial Police say a woman was injured Sunday morning when her vehicle was struck by the wheel of a tractor trailer that came loose on Highway 401 between Brockville and Prescott.

The 23-year-old woman from Ottawa was driving in the westbound lanes when, at around 10:34 a.m. Sunday, her vehicle was hit by the wheel of an eastbound tractor trailer, an OPP spokesperson said.

A tweet shows damage to the driver’s side of the car.

The driver of the car was taken to hospital with non-life threatening injuries and the tractor trailer was pulled from the road for a formal inspection.

OPP Const. Annie Collins told CTV News the driver has been charged with failure to do an inspection and driving an unsafe motor vehicle.

Westbound lanes of Highway 401 between Prescott and Brockville were briefly closed Sunday morning but they have since reopened.

Last week, police responded to a collision on Highway 7 that they said was caused when a newly-installed winter tire came loose because the wheel had not been properly retorqued after the tire change.

--With files from CTV's Dave Charbonneau.

Prime Minister Justin Trudeau will be presenting the federal government's offer for billions in new health-care funding to the provinces and territories at a highly anticipated meeting in Ottawa today.

Search teams and emergency aid from around the world poured into Turkiye and Syria on Tuesday as rescuers working in freezing temperatures dug, sometimes with their bare hands, through the remains of buildings flattened by a powerful earthquake. The death toll soared above 5,300 and was still expected to rise.

Canada’s yearslong shortage of veterinarians was exacerbated during the pandemic, as more people welcomed pets into their homes to add joy and companionship during lockdowns. Now, concerns around quickly accessing medical care for animals is more urgent than ever, says one vet.

A former London police officer was sentenced Tuesday to life in prison with a minimum term of 30 years for raping and sexually assaulting a dozen women over a 17-year period.

Astronomers have discovered a rocky exoplanet about a few dozen light years away from Earth with conditions that could make it habitable.

John Benoit of West Jeddore, N.S., says he has been beachcombing for over 50 years, but his most recent discovery -- a Killick anchor -- is by far his most memorable.