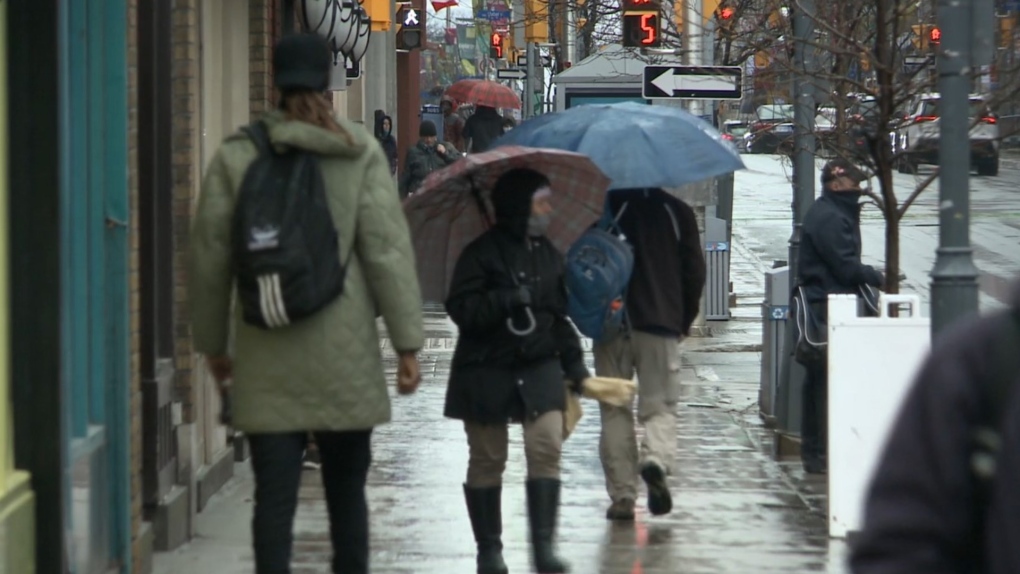 People with umbrellas walk down an Ottawa street in this undated photograph. (CTV News Ottawa)

The power is back on for thousands of customers in Ottawa and across eastern Ontario, after strong winds caused by a cold front knocked out power across the region.

Environment Canada had issued a wind warning for Ottawa and parts of eastern Ontario, calling for westerly winds gusting to 90 km/h Saturday afternoon in the wake of a strong cold front. The wind warning ended just after 4 p.m.

"The wind is too dangerous, I don't like it," Kham Phong said on Saturday.

"I'm not going to stay out here because I don't want trees to fall down on my head. So scary!"

Hydro Ottawa reported approximately 9,000 customers were without power in different pockets of the city. Power was restored to most customers by 7 p.m.

The largest outage was in an area spanning from Osgoode to Riverside South-Findlay Creek and Gloucester-Southgate. Hydro Ottawa said a hydro pole fire knocked out power to 8,200 customers.

Smaller outages were reported in the College/Knoxdale-Merivale area, Alta Vista and in Ottawa's west end.

As of 6:40 p.m., small pockets of eastern Ontario were still without power.  The largest outage was in the Sharbot Lake area, with approximately 1,000 customers without power.

An open air fire ban is in effect for the city of Ottawa.

Showers and flurries ending this evening then partly cloudy with a 60 per cent chance of flurries. Low minus 7 C, with the wind chill making it feel like minus 12 overnight.

Sunday’s outlook is mainly cloudy with a high of plus 1 C.

Monday’s looking sunny with a high of 5 C.

A mix of showers and flurries is in Tuesday’s forecast. High 4 C.

Wednesday could see a bit of sunshine.

The city of Ottawa says the Mayor's 20th Christmas Celebration scheduled for Saturday will be postponed because of the weather forecast.

"Environment Canada has issued a weather advisory for winds gusting up to 70 and 80 km/h – which can pose safety risks for all visitors and participants," the city said in a statement.

The Mayor's Christmas Celebration has been rescheduled to Saturday, Dec. 10.