'We're ahead of this thing': COVID-19 levels in Ottawa wastewater remain low

OTTAWA -- Ottawa’s COVID-19 wastewater levels have dropped near the limits of where researchers can detect the virus, the project’s principal investigator said on Friday.

“I’m a general optimist, but I do think we’re ahead of this thing now,” Dr. Alex MacKenzie, senior scientist at the CHEO Research Institute, told CTV News at Noon. “Yesterday’s numbers were really almost at the limits of detection.”

COVID-19 levels in Ottawa’s wastewater have proven to be an early indicator of rising or falling case numbers throughout the pandemic.

As of late this week, the wastewater levels were at their lowest point since last summer. And MacKenzie said researchers are not seeing variants of concern, although they may be present beneath the level of detection. 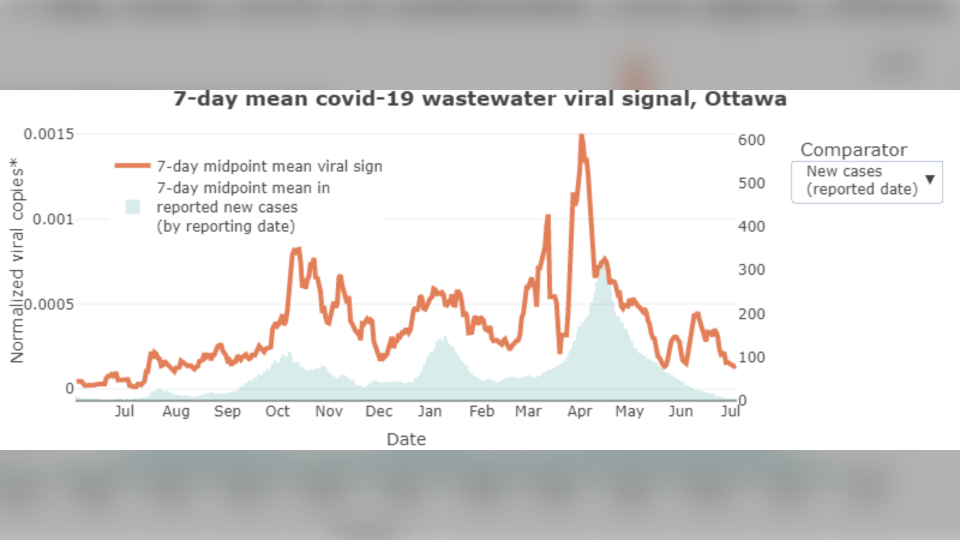 Ontario entered Step 2 of its reopening plan on June 30, so it may be too early to tell whether the reopening and Canada Day celebrations will have an effect.

But even if they do, MacKenzie said he doesn’t expect a corresponding spike in hospitalizations and ICU admissions.

“That Delta-driven wave is not happening here,” he said. “Every week that goes by as our vaccination rates go up, the chance of it happening to the same degree here, I think, gets less.”

The U.K. and Israel, whose vaccine coverage is similar to Canada’s, have seen cases go up because of the Delta variant, which is more contagious than previous trains of the virus. However, hospitalizations and intensive care admissions there remain low compared to the third wave.

Ottawa Public Health has reported 25 cases of the Delta variant, out of more than 7,800 cases involving variants of concern.

“Even should the numbers start tracking up, it looks like it might be an illness of the unvaccinated young more than the more vulnerable elderly,” he said.

And with 52 per cent of Ottawa adults now fully vaccinated, the number of people vulnerable to the virus should continue to decrease.

“I think our COVID focus has been ingrained in the last year and a half. I think we’re going to have to learn to move on and not necessarily obsess at some level about it, as we are understandably because of what we’ve been through.”