Volunteer firefighters south of Ottawa got some hands-on training Saturday morning with scenes dealing with emergency situations from highway accidents to active weather.

Several scenarios were set up at the Eastern Ontario Boneyard near Cardinal, Ont., including vehicle rollovers and a multi-car situation.

"With the pandemic that last couple years, our training has suffered a little bit so we're out here spending a full day going through some techniques," said Edwardsburg-Cardinal Township Fire Chief Brian Moore.

"We've got quite a bit of highway with the 401 and 416 so we do respond to a lot of motor vehicle accidents," he noted. "Most of our scenes luckily do not require extrication, but we always have to be prepared for the ones that do."

One situation involved three vehicles, with debris piercing the front windshield of one, something crews would respond to on the highway, or during extreme weather. 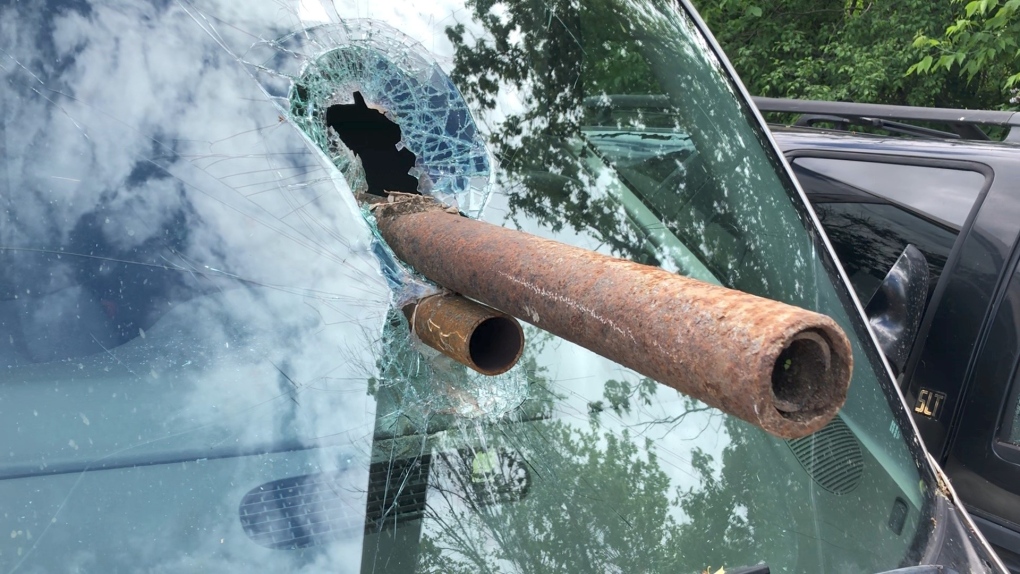 A piece of debris through a vehicle windshield at the Eastern Ontario Boneyard in Cardinal, Ont. (Nate Vandermeer/CTV News Ottawa)

"The storms seem to be happening more often in eastern Ontario and, yeah, there is potential for all kinds of different rescue scenarios," Moore said.

The scene also included a leaking propane tank in the trunk of one of the vehicles.

"We've tried to make it challenging, to limit the patient access," Moore added. "If they can figure out the ways to work through this, then most of the stuff they see on a day to day basis should be fairly easy."

Moore says members on the scene had between one year and 25 years experience.

"Vehicles are always changing, the things we learned 20 years ago don't apply to the vehicles that are on the road today," he noted.

Volunteer firefighter Ann Shorey joined the department four years ago after witnessing an accident on the 416.

"My first instinct was to park my vehicle, run across two lanes of highway to see how I could help," she said. "The adrenaline rush was pretty crazy, so you know, I started to think about it and maybe I could do something like this and help my community."

"No two scenarios are ever the same," Shorey said. "We can run into a ton of different types of accidents on the highway and it's just important to keep up on our skills."

"The first step is to asses the scene, check for safety, (then) come up with a plan of attack to get the patients out as quickly and safely as possible," she added. 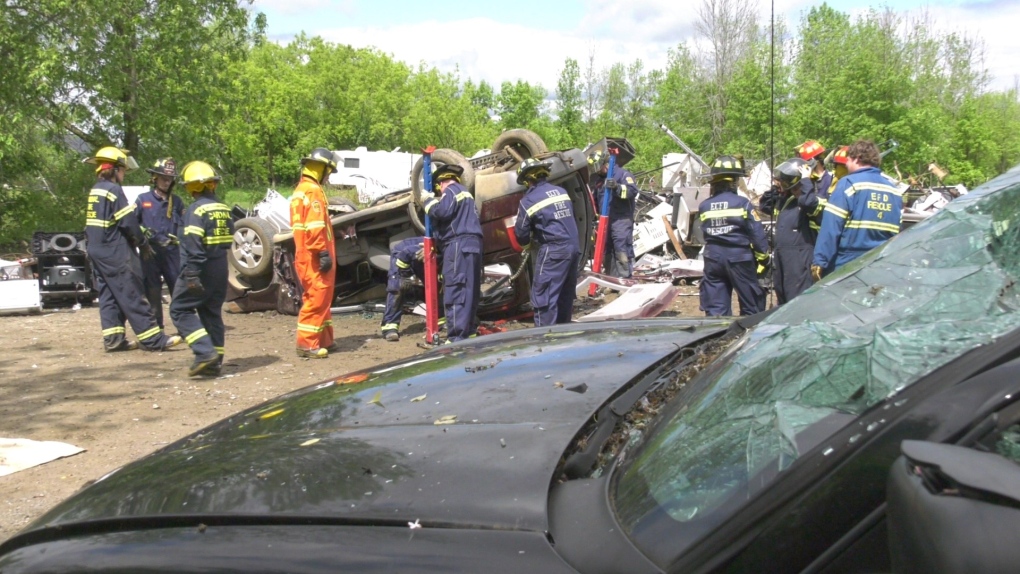 Moore said newer hydraulic tools were also on hand to give the firefighters some experience.

"The tools we are using today, they're the latest in the Jaws of Life. They are much better than the old tools that had the hoses, they're more maneuverable, they are battery powered and they put out more force," he said.

Training at the Boneyard happens a few times a year according to owner Joe Martelle.

"We've got the cars and the vehicles here, they are going to scrap anyways so it's not like we're sacrificing a lot," Martelle said, adding he glad to help out the fire service, who sacrifice their time saving lives.

"You're out on the highway and there is a rollover or something that looks like this, there are no bodies in these vehicles," Martelle said. "They go out there and they're doing the tough stuff man, what we're doing here is nothing."

"These guys are like the soul of the community," he added.

The department has two fire stations in Spencerville and Cardinal with 43 active firefighters. But like most departments across the region, they are also actively recruiting new volunteers to join the team.

"I get a lot of satisfaction out of it, it's great to help the community," said Shorey. "The people that I live and work with, and the family, the brotherhood, it's great."

Anyone interested in becoming a volunteer firefighter for Edwardsburg-Cardinal Township can apply here.

The man charged Tuesday with seven counts of murder for opening fire at an Independence Day parade in suburban Chicago legally bought five weapons, including two high-powered rifles, despite authorities being called to his home twice in 2019 for threats of violence and suicide, police said.

A northern heatwave is melting records in Yukon and Northwest Territories, where temperatures climbed above 30 C in the Arctic Circle.

The Canadian Armed Forces (CAF) has released further details about what will and won’t be allowed under its revised dress code expected to be enforced starting this fall.