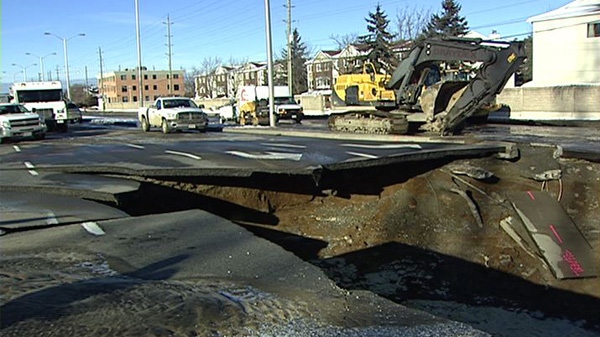 Although watermain repairs are finished on Woodroffe Avenue, near Hunt Club Road, the street is not yet completely open to traffic.

The northbound lanes of Woodroffe Avenue were reopened in time for the Monday morning commute.

One southbound lane was made available for OC Transpo only on Monday afternoon. All other southbound lanes remained closed to traffic. Those lanes are expected to reopen on Wednesday.

Until then, detours remain in effect and commuters are asked to avoid the area.

The road was closed Friday after an early morning watermain break caused the cement on Woofroffe Avenue to weaken and buckle, creating a giant hole that swallowed a city truck. It was the second watermain break in the area since 2007.

Coun. Jan Harder says the city needs to examine how to prevent a similar situation from happening again.

"If they think we could have another break, then we need to be proactive about it – this is a major, major problem for a large group of businesses and taxpayers in our city," Harder told CTV Ottawa on Monday.