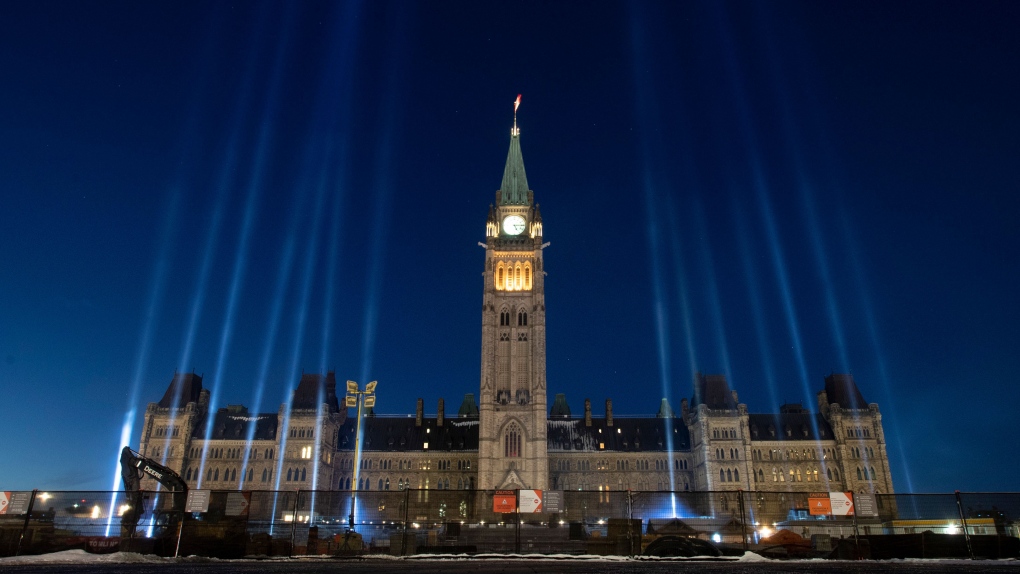 Fourteen lights illuminate the sky over the Parliament buildings on the 30th anniversary of the 1989 Ecole Polytechnique Montreal tragedy Friday December 6, 2019 in Ottawa. THE CANADIAN PRESS/Adrian Wyld

OTTAWA -- A virtual ceremony in Ottawa will mark the 31st anniversary of the École Polytechnique massacre on this National Day for Remembrance and Action On Violence Against Women.

It was on this day in 1989 that 14 women—many of them engineering students—were murdered and more than a dozen people were wounded in the mass shooting at Montreal's École Polytechnique that was prompted by the killer's hatred of women.

Prior to the events of April 18 and 19, 2020 in Portapique, N.S., it was the deadliest mass shooting in Canadian history.

This year, many of the traditional events marking the anniversary of the massacre—including wreath-layings, speeches and a ceremony to project beams of light into the sky from the Mount Royal lookout in Montreal—will proceed either virtually or without crowds due to the COVID-19 pandemic.

A virtual ceremony in Ottawa will be broadcast on the Women's Event Network Facebook page. It begins at 6 p.m. EST.

For people who still wish to place roses at the Women's Monument in Minto Park, the Women's Event Network says Happy Goat Coffee on Elgin Street, across from the park, will be offering roses free of charge from 10 a.m. to 6 p.m.

Mourners are asked to respect physical distancing and pandemic measures if they choose to attend the monument in person.

Flags at City of Ottawa sites will be flown at half-mast to mark the occasion.

Flags at #OttCity sites will be lowered to half-mast from sunrise to sunset today, Dec. 6 to commemorate the National Day of Remembrance and Action on Violence Against Women and marks the anniversary of the murders in 1989 of 14 young women at l'École Polytechnique de Montréal. pic.twitter.com/0zzESv9dFm

The virtual Ottawa event will feature speeches calling for action on violence against women and action on state violence against Black and Indigenous People of Colour (BIPOC), as well as a choral piece by the Vox Eclectica Women's Chamber Choir.

Speaking on Newstalk 580 CFRA's "The Goods with Dahlia Kurtz", Executive Director of the Canadian Resource Centre for Victims of Crime Aline Vlasceanu said many forms of violence are interconnected.

"If you want to deal with one thing, you have to deal with all the other facets of the problem," Vlasceanu said. "When it comes to gender-based violence, we know that Black and Indigenous People of Colour are actually the most vulnerable section of our population. When it comes to tying everything together, it kind of works hand-in-hand."

Vlasceanu said Ifrah Yusuf of the Justice for Abdirahman Coalition would be one of the keynote speakers at the event Sunday. Yusuf will bring forward five demands for the city.

"They will be calling on everyone's support," Vlasceanu said. "If we're doing more for Black and Indigenous People of Colour in Ottawa, we're inadvertently doing more for women throughout Ottawa."

The COVID-19 pandemic has brought concerns about violence against women and domestic abuse to the forefront, as victims find themselves isolated and cut off from support by health restrictions.

Several helplines for women experiencing violence at home are reporting dramatic increases in calls since public health measures aimed at fighting the spread of COVID-19 came into effect and the United Nations has called violence against women and girls a "shadow pandemic".

Speaking on "The Goods", Vlasceanu said the COVID-19 pandemic has made some existing problems worse but has also brought them to light.

"The COVID-19 pandemic simply exacerbated everything that already existed," Vlasceanu said. "All of the flaws within our system have kind of blown up and we can see them a lot better now, given the circumstances."

With files from CTV News Montreal and The Canadian Press.

Mark your calendars. Tomorrow is the National Day of Remembrance and Action on Violence against Women. There will not be...