VIA trains cancelled until mid-Friday, at the earliest

A CN freight train derailment at Brockville, southwest of Ottawa, is blocking Via Rail passenger service on the Toronto-Montreal and Toronto-Ottawa routes. A CN spokeswoman says no one was injured when the 26-car eastbound freight train derailed near the eastern Ontario city at about 4 a.m. today.  She says the freight train included two loaded automobile carriers and had five cars carrying carbon powder and 13 unloaded fuel tank cars.

Via Rail says it will transport passengers using buses until the derailment site is cleared but did not know exactly how long the disruption would last.

A CN spokeswoman says the route will be blocked at least for the morning and the site is being assessed for any possible leaks.

The Transportation Safety Board has investigators on scene. A spokesperson says it generally takes at least a day to investigate derailments. The TSB must release the site before CN can clear debris and reopen the tracks.

Crews are working hard to clear the tracks. He sweient has stalled VIA passenger service btwn TO & MTL @ctvottawa pic.twitter.com/JbeWcj9xB4

One of the cars derailed near brockville. CN train derailed around 4:10am @ctvottawa #ottnews pic.twitter.com/1dfMv89p50 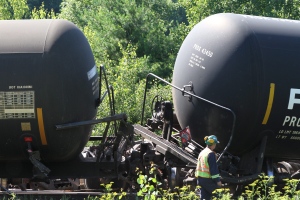