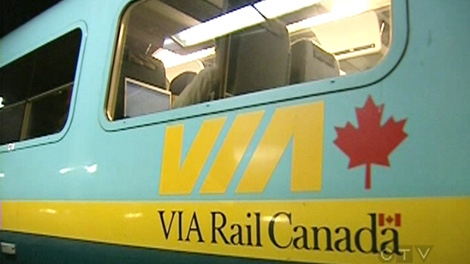 Via Rail service along the Ottawa-Toronto corridor has been resumed after a collision with a partially derailed CN freight train near Gananonque, Ontario on Friday.

The incident happened aboard VIA train #47 which left Ottawa at 12:30 pm en route to Toronto.

"And I was actually saying to my friends that we looked really really close to it. As we were just about to pass it, we bumped it into one of the derailed cars that was sticking out a little bit more and we looked out the window and saw a little bit of smoke and stuff. We definitely felt the impact, Rabaa told CTV Ottawa.

Rabaa was headed to the One Direction concert in Toronto.

CN spokesman Jim Feeny says the collision punctured the fuel tank of a Via Rail locomotive.

Via Rail has sent out a travel advisory warning travelers to expect "major delays" in the Toronto-Ottawa, and Toronto-Montreal routes Saturday. Partial rail service resumed Friday from Montreal-Ottawa and Toronto-Kingston.

Passengers on Via train # 47 will be bussed to Toronto.

The Ottawa Bus Terminal added extra buses to Toronto Friday evening to accomodate the VIA passengers affected by the delay.

VIA offered passengers affected by the incident travel vouchers or full refunds.