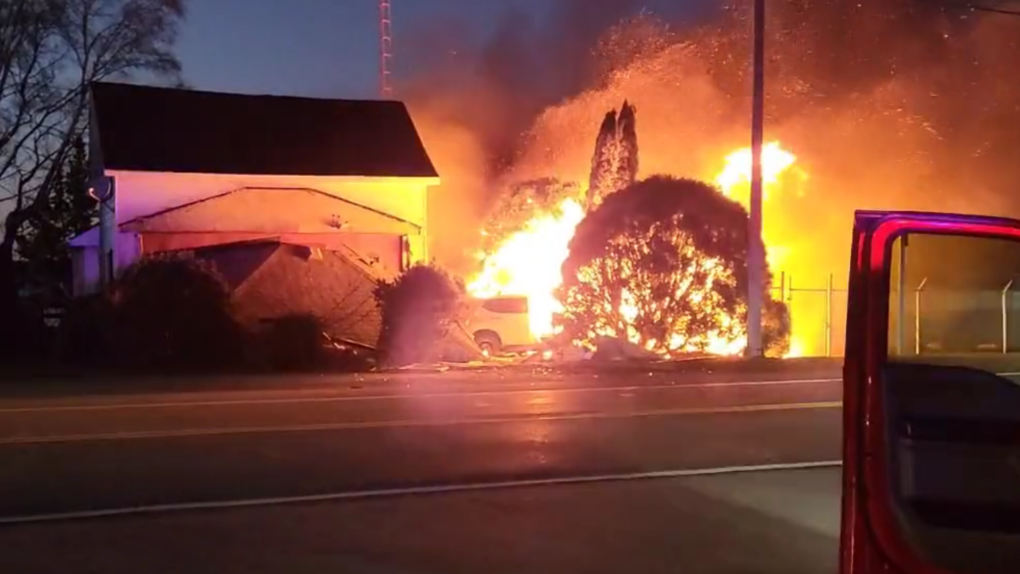 A vehicle crashed and caught fire outside this home in Portland, Ont. Nov. 26, 2022. (Ontario Provincial Police/Twitter)

Two people who were injured in a fiery crash when their vehicle crashed into a home in Portland, Ont. are expected to fully recover, police said Monday.

Ontario Provincial Police officers responded to the scene of the blaze on Highway 15 Saturday evening. OPP said the vehicle crashed into the home and caught fire, with the blaze consuming both the house and the car.

The occupants of the vehicle were pulled to safety just before the fire started and were taken to hospital. The 73-year-old driver and 85-year-old passenger both suffered minor injuries, police said, and are expected to fully recover.

OPP said the building is a "total loss" and was unoccupied at the time of the collision.

The highway was closed at Station Road and drivers were asked to avoid the area. The road reopened around 9:30 p.m. Saturday.

#LeedsOPP officers in Portland @RLTwp at the scene of a single vehicle collision, that has caught fire and spread to a home.

Occupants from vehicle pulled to safety prior to fire and transported to hospital. Home was unoccupied at the time of the incident

PM Trudeau presents premiers $196B health-care funding deal, including $46B in new funding

After raising interest rates eight consecutive times, Bank of Canada Governor Tiff Macklem told an audience in Quebec City on Tuesday that inflation is showing signs of 'turning the corner' and that the coming year 'will be different.'

Balloons and drones among 768 Canadian UFO reports from 2022: researcher

Balloons and drones were among 768 reported UFO sightings in Canada last year, according to Winnipeg-based researcher Chris Rutkowski, who also found that eight per cent of all cases remained unexplained.

A report from British Columbia's coroner says a prominent anti-vaccine and COVID critic died in 2021 of a drug overdose, although he also tested positive for the illness post-mortem.