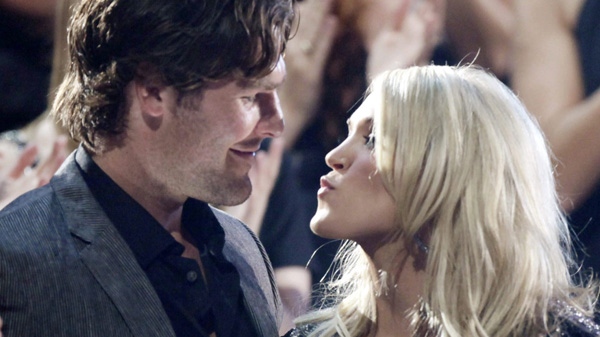 Carrie Underwood kisses her boyfriend Mike Fisher of the NHL Ottawa Senators as she won "Video of the Year" at the 2010 CMT Awards in Nashville, Tenn. Wednesday, June 9, 2010. (AP Photo/M. Spencer Green)

Carrie Underwood and Mike Fisher's wedding has hit newsstands, selling out at many Ottawa locations.

Underwood appears in her lace and silk wedding gown on the cover of the latest issue of People Magazine, which includes a six-page spread on the couple's pretty in pink wedding at Georgia's Ritz Carleton resort at Reynolds Plantation.

Carrie has taken Fisher's last name, but will remain Underwood professionally, the couple told the magazine.

Underwood, who wore a Monique Lhuiller gown and diamond tiara, told People she fought back tears by saying the Pledge of Allegiance.

"I must have said it 20 times that night," Underwood told the magazine.

The country superstar's dog, Ace, also attended the ceremony, wearing a pink tux. As the couple stood before their guests to say their ‘I dos', the magazine said Ace started barking, while everyone else laughed.

The hotel ballroom at the Ritz Carleton was lit in shades of pink for the reception, which Underwood's wedding planner described as "very elegant, very girlie."

Fisher's love for hockey was also incorporated with hockey pucks serving as table assignments, displaying the names of their 250 guests.

The couple, who met at one of Underwood's concerts in 2008, is now vacationing in the south Pacific.