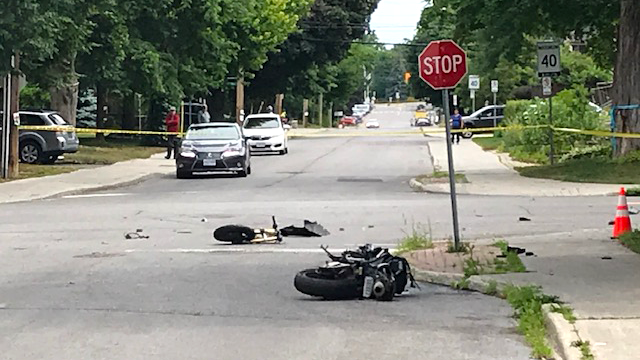 A motorcyclist was transported to hospital after a crash near Holland Avenue and Ruskin Street. (Jim O'Grady/CTV News Ottawa)

OTTAWA -- Two motorcyclists were transported to hospital with serious injuries after two crashes in Ottawa on Wednesday.

The first crash occurred near the Ottawa Hospital Civic Campus.

Ottawa Police say a vehicle and the motorcycle collided near Holland Avenue and Ruskin Street just before 10 a.m. Wednesday.

Paramedics say a man in his 30s was transported to hospital with multi-system trauma. The injuries were described as serious, but non-life threatening by police.

A second person was assessed on scene by paramedics.

The second collision happened at 12:30 p.m. at Walkley Road and St. Laurent Boulevard.

Paramedics say a person in their late 40s driving the motorcycle was taken to the Ottawa Hospital with serious injuries.