Two men charged after a series of commercial break ins 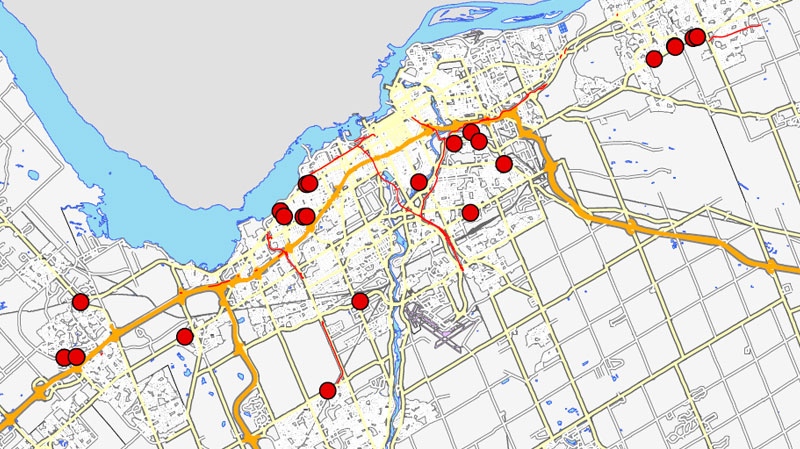 This map shows where the robberies in Ottawao occurred Tuesday, March 6, 2012.

Ottawa police have charged two men in connection with a series of commercial break and enters across the region.

In early January, a series of overnight commercial break-ins across Ottawa were committed by two suspects wearing balaclavas. In all the break-ins, the suspects gained access by smashing the front entrance with a sledgehammer.

Gatineau police, who were investigating similar break-ins at the time, gave their counterparts in Ottawa a description of a suspect vehicle.

Ottawa police stopped the vehicle and identified the suspects.

After their arrest two search warrants were executed at Ottawa residences. A large amount of property was seized along with the alleged getaway vehicle used in the break ins.

Clint Grainger, 31, and Bogdan Iosif, 32, both of Ottawa are facing multiple counts of break and enter, wearing a disguise during the commission of an offence, possession of break in instruments, conspiracy to commit an indictable offence and mischief.

Further charges are pending against the pair related to 20 more break-ins in Ottawa along with more than a dozen break-ins in eastern Ontario and Quebec.

Tens of thousands of dollars in property has been recovered and police say it will be returned to owners. The property includes stereo equipment, cellular phones, designer sunglasses, men's clothing, hair products and Canada Goose coats.

The men appeared in court on Feb. 26 and were remanded into custody.