WILLIAMSTOWN, Ont. -- Max Kelly was watching a movie on his laptop when the bus he was a passenger on collided with a tractor-trailer in eastern Ontario on Tuesday afternoon injuring nearly two dozen people.

Then the chaos started.

Windows were shattered. Blood was on the floor. A white piece of metal from the truck was lodged in the front of the crushed bus. A woman in the front seat was pinned, Kelly said, screaming for help.

"It was horrific," said Kelly, who was sitting in the middle of the upper level of the double-decker bus.

"She was screaming. Total panic and chaos."

Panicked passengers leaped to safety from the broken windows on the upper floor, with others hurried through the middle doors of the bus to get away from the vehicle.

"The front of the bus was crushed, compacted and there were people stuck inside of it," said passenger Igal Bord, who snapped pictures of the mangled bus after he got out. "You couldn't even see them. You could hear them screaming."

Four seriously injured people -- including a woman who police said suffered life threatening injuries -- were taken to hospital after the crash en route from Montreal to Toronto, police said.

The injured woman -- who police had previously identified as a teen -- was airlifted from the scene near Lancaster, Ont., while paramedics and firefighters tended to many of the injured on site, Ontario Provincial Police Sgt. Kristine Rae said Tuesday night.

Nineteen people were taken to hospital with minor injuries.

Those who were not hurt were shuttled to an arena in nearby Williamstown where a Red Cross centre had been set up. Many were headed back to Montreal or continued their trip to Toronto on Tuesday night, just wanting to get home.

Most didn't have their luggage as it was still on the wrecked bus. Kelly, for instance, wanted to get a family heirloom back: an old banjo the musician took with him for a gig in Montreal.

Kelly described what felt like the bus braking hard or the feeling of a blown tire. Several passengers said people were thrown from their seats, as the bus sped into a ditch on the side of Highway 401 before coming to a crashing halt among the trees lining the westbound lanes.

Katalia Percivao said the passenger next to her was thrown from her seat.

"I was trying to help people, but then I just see blood running everywhere so I got scared and I jumped through the window," Percivao said. "The windows were all cracked so I went jumping out."

The bus itself, passengers said, was leaning on one side with the trees keeping it propped up. Max Borcuti, 17, said he saw gas and smoke coming from the crashed bus.

Tweeted photos showed a white tractor-trailer with a badly damaged back end pulled over on the side of the highway.

"I saw the white truck smash the window and the second thing that I realized was that the glass ... was in my mouth," said Paradis Lashgari, who was sitting near the front on the upper floor of the bus.

As she tried to get out through the rear doors, she slipped on the stairs going down -- blaming the fall on blood on the steps -- and fell forward into another passenger who stopped her fall. Once outside, she and other passengers hopped a fence lining the ditch and waited for help.

"I was expecting explosions and stuff, but thanks God it didn't happen."

About 45 passengers were on the Megabus travelling along the major highway just west of the border between Ontario and Quebec at the time of the crash.

Sean Hughes, director of corporate affairs for Megabus.com North America, confirmed in an email to The Canadian Press that a Toronto-bound bus from Montreal was in a crash. He added that, "Safety is our No. 1 priority and Megabus is fully co-operating with the authorities with their investigation into the incident."

Hughes would not elaborate.

Police refused to speculate on the cause of the crash, but confirmed the front of the bus had been damaged.

The collision shut down a stretch of the westbound lanes of the 401, the main artery through the region, near Lancaster, east of Cornwall, Ont., for close to three hours.

Megabus.com, a subsidiary of Paramus, N.J.-based Coach USA, is one of the largest privately funded providers of city-to-city express bus transportation. 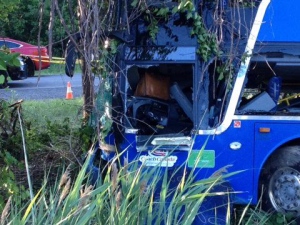