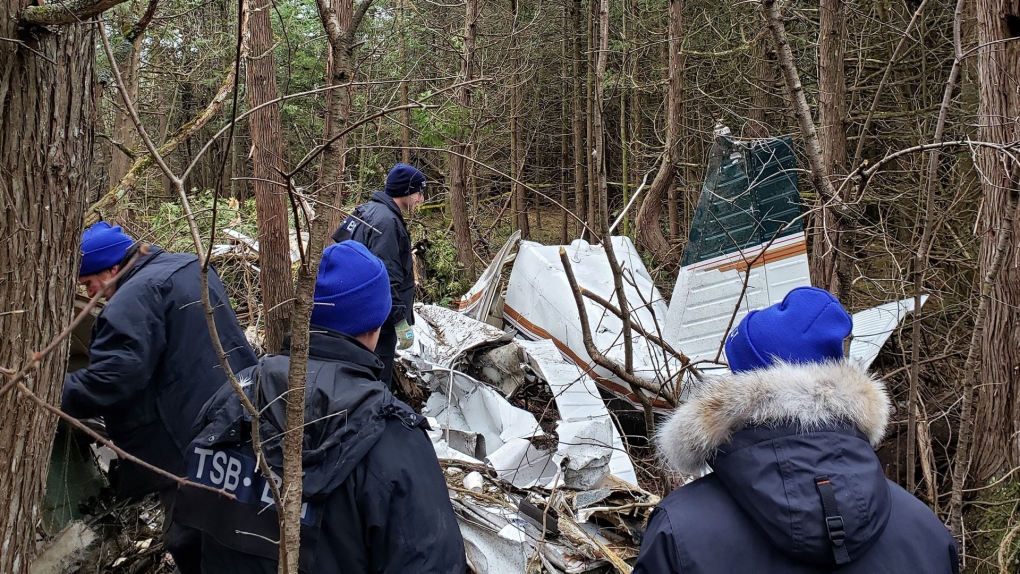 The Transportation Safety Board of Canada says that seven people were killed after a plane crashed in Kingston, Ont. (Twitter/@TSBCanada)

OTTAWA -- The Transportation Safety Board concludes a pilot flying at night with limited experience did not recognize the hazards associated with night visual flight rules into poor weather conditions on the day of a fatal plane crash near Kingston.

In its final report, the TSB says the fatal crash highlights the risk of night flying with inadequate visual references to the surface, particularly when weather conditions are poor and over areas with little lighting.

A privately registered U.S. Piper aircraft was flying from Toronto's Buttonville Municipal Airport to Neuville Airport in Quebec with a pilot and six passengers onboard.

The TSB says while the aircraft departed during daylight hours, the majority of the flight was to take place during the hours of darkness.

"As the weather deteriorated throughout the flight and the aircraft neared the Kingston Airport, the pilot contacted the Kingston flight service station and stated his intention to land there," said the TSB in a media release.

The TSB says its investigation found that the pilot departed Toronto/Buttonville Municipal Airport when the weather conditions for the intended flight were below the limits required for a night visual flight rules (VFR).

"Given the pilot’s limited flying experience, it is likely that he did not recognize the hazards associated with a night VFR flight into poor weather conditions," said the TSB.

"While approaching the Kingston Airport, the pilot likely lost visual reference to the surface, became spatially disoriented, and lost control of the aircraft."

The TSB says the pilot began flight training in April 2017 and obtained his U.S. private pilot certificate in May 2018. He had accumulated 281 total flight hours before the occurrence flight, including 190.2 hours on the occurrence aircraft since purchasing it in February 2019.

Nearly all of the pilot's flying experience had taken place in Texas. The TSB says the pilot had not flown in Canadian airspace before arriving in Toronto a few days before the crash.

The pilot was identified as Otabek Oblokulov of Missouri City, Texas. Oblokulov, his wife Zamira Boboeva and their three children were killed in the crash. The brother of Boboeva, Bobomurod Nabiev, and his wife, Sabina Usmanova, also died in the crash.