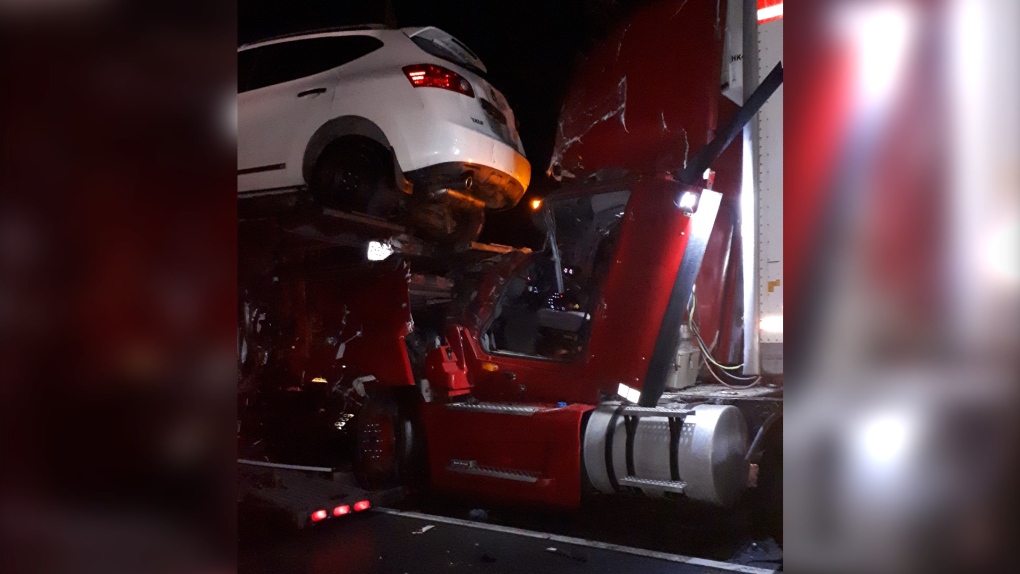 A man in his 50s was seriously injured following a collision on Highway 417 near Panmure Road early Dec. 1, 2020, after colliding with a car hauler. (Photo provided by Ottawa Fire Services)

OTTAWA -- Ottawa Fire Services (OFS) says firefighters had to remove a truck driver who was trapped in his vehicle following a serious crash on Highway 417 overnight.

Emergency crews were called to a stretch of the highway near Panmure Road in rural west Ottawa at around 1:50 a.m. A tractor trailer and a car hauler truck had collided, causing one of the cars to crash into the cab of the tractor trailer.

OFS said in a release Tuesday morning that they were called by Ottawa paramedics to assist in freeing the trapped driver, who was pinned by the dashboard.

Firefighters were able to remove the door and pry the dashboard off of the driver and safely get him out of the cab. Paramedics said the man in his 50s suffered injuries to his upper body and face and was taken to the trauma centre in serious but stable condition.

OFS said the crash also caused several jugs of chemical solvents and adhesives were leaking from the trailer of the truck. A hazardous materials team was sent to the area to contain the spill. Documents in the vehicle allowed crews to quickly identify the materials and contain them.

The truck was towed away from the area at around 5 a.m.