Transport Canada warns of 'threat' to safety at Fallowfield crossing 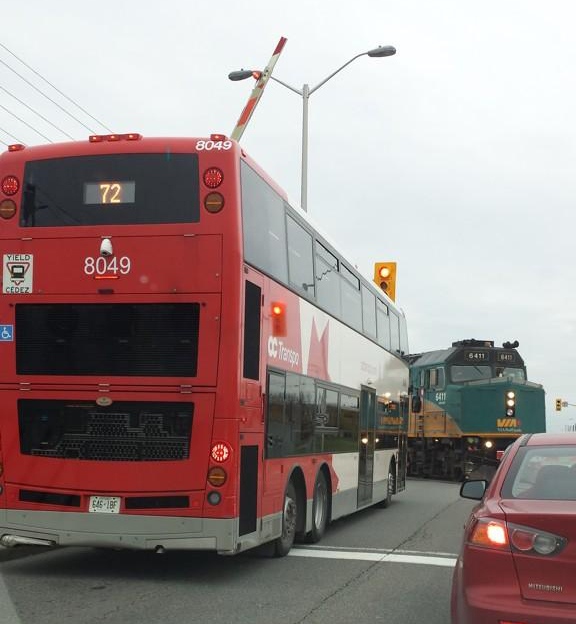 An investigator for Transport Canada is warning the City of Ottawa about a 'threat' to safety at the Fallowfield level crossing.

Valencik's letter comes after a close call Thursday between an OC Transpo bus and an oncoming VIA Rail train at Fallowfield Road. The number 72 bus stopped in the middle of the intersection, the railway crossing gate resting on top of the double decker bus.

"When a railway crossing warning system is activated, the danger of stopping under the railway crossing gate arms puts the road users at a threat of coming into contact with an approaching train," the inspector wrote.

Transport Canada has given the City of Ottawa until November 21st to propose changes that would make the crossing safer.

In a letter of response, the City of Ottawa said OC Transpo is reviewing its procedures and directives to drivers approaching railway crossings.

Six people were killed in a bus-train crash at the Fallowfield level crossing in 2013 after an OC Transpo bus drove through the crossing gate, striking an oncoming VIA passenger train.

The Transportation Safety Board is investigating this week's incident.

Transport Canada warns of &#x27;threat&#x27; to safety at Fallowfield crossing

Memo from City of Ottawa re: Railway Safety Inspector&#x27;s letter