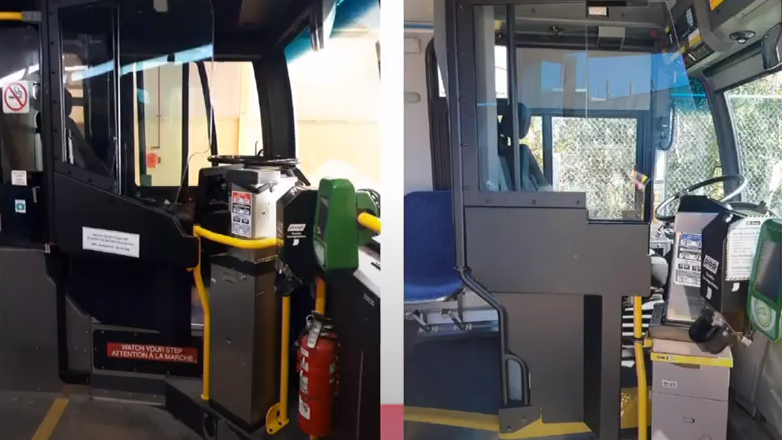 OTTAWA -- OC Transpo is spending $6 million to install permanent barriers on all buses to protect drivers from possible assaults and COVID-19 transmission.

The Transit Commission approved the cash to install the barriers on all buses just days after a driver was sucker-punched by a passenger on an OC Transpo bus.

OC Transpo formed a working group to conduct a 12-month test program in April 2019, where buses were retrofitted with a permanent operator barrier.  The Transit Commission was told over the course of the testing period, the focus expanded to include the analysis of potential benefits in preventing the transmission of COVID-19.

"Feedback highlighted areas such as design of the glass, ergonomics, durability, glare and sizing."

The $6 million cost will retrofit all 746 OC Transpo buses.

The new permanent barriers will replace the soft vinyl barriers installed on all buses in June as an added protection for bus operators during the COVID-19 pandemic.

OC Transpo general manager John Manconi told the Transit Commission he spoke to a driver on Tuesday that was sucker-punched by a passenger who refused to pay.

Manconi said the driver "politely asked" a rider to put their bags down and come back to pay. When the passenger didn't return, Manconi says the driver alerted the agency's control centre about the non-paying customer, as all operators are trained to do.

"The customer got up and sucker-punched the operator through the barriers on the side of his head and hit his eye. That operator is off," Manconi said, adding the operator suffered physical and psychological damage.