OTTAWA -- Three tragedies in the past 24 hours, all drownings in the region, a reminder of the dangers of open water and to be safe when headed out.

During the hot days of summer, a good way to beat the heat is splashing around in the water.

Stephanie Pineau often takes her kids to the Jules Morin Park wading pool. Pineau knows this water is not deep and there are plenty of lifeguards, but water safety is still top of mind.

"We always stay close to the kids," says Pineau. "It's been really important to us to teach them good techniques so they know that if we are getting close they are not allowed to go close to the water without us around."

Teaching children to avoid water is a good tip; it only takes a few inches of water to drown.

Chris Wagg from the Ottawa Drowning Prevention Coalition is reminding those who are heading out to pools and beaches or onto boats that water can pose a real threat. It is the leading cause of death for children under four.

"Remember to just stay within arms reach and swim at supervised areas," says Wagg. "People always portray in movies that someone is screaming yelling for help arms flailing, but often people just slip below the surface."

Monday marked the start of drowning prevention week. The day was also marked with tragedy, with three drownings across the region in less than 24 hours.

Monday morning, a man in his 70s drowned in a residential pool in Montebello, Que., east of Gatineau. Later that night, south of Maniwaki on Lac des Trente et un Milles, a 20-year-old woman went missing after the boat she was in hit a rock. There were four people on the boat, three made it back to shore. She was not wearing a life jacket.

In Lanark, OPP have recovered the body of a 46-year-old Ottawa man after he fell into Dalhousie Lake, northwest of Perth, Ont., Monday afternoon while paddle boarding with a friend. He was also not wearing a life jacket.

Wagg says if you're going out on the water, on a paddleboard or any watercraft, having a properly-fitted lifejacket is important. If anything does happen, and you go overboard, you'll be afloat and safer.

Across the region, there have been 14 drownings this year, with three in Ottawa. Ontario is up 11 from last year, a grim reminder of the importance of being prepared and that currents in rivers can be strong and carry you away quickly.

When you do head into the water, be alert, know your surroundings, stay hydrated, use the buddy system, avoid nighttime excursions, and abstain from alcohol and drugs. 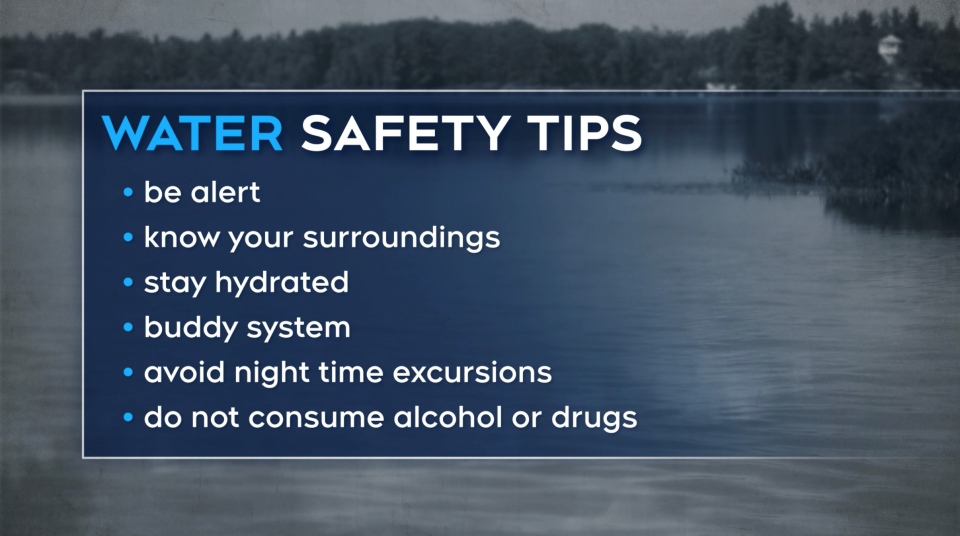 Learning to swim builds a strong foundation and Ottawa has resumed their lessons in city pools. Wagg says lifeguards not only teach swimming, they also teach water safety, how to self-rescue and how to rescue others. Parents and caregivers should also know C.P.R.

Resuscitation can help save lives.