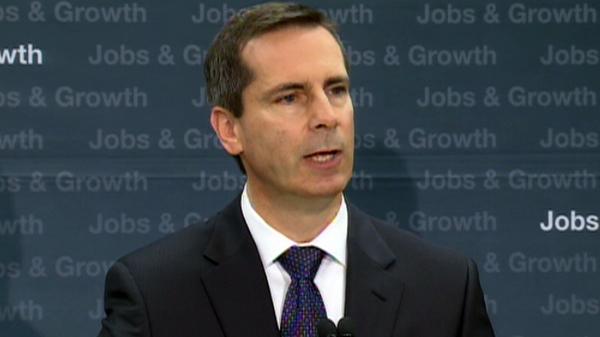 Paul Bliss has details about why Premier Dalton McGuinty came out swinging at Prime Minister Stephen Harper's pledge of a $4.2-billion loan guarantee for the large Newfoundland power project. April 4, 2011.

TORONTO - The Opposition made "a good point" in complaining about the premier and cabinet ministers filing their expense reports under staff members' names instead of their own, Dalton McGuinty said Tuesday.

For the second day in a row, the Progressive Conservatives accused the Liberal government of breaking its own disclosure rules by either "hiding" expenses under someone else's name, or not filing them at all.

"The premier got caught trying to hide his expenses under the name of his staff, and it appears to be rubbing off on his ministers," Hudak said in the legislature. "There are four other ministers who haven't filed a single expense and tried to hide them under their staff's names."

McGuinty wasn't in the legislature Tuesday, but told reporters after an unrelated event in Ottawa that he would start filing his expenses under his own name from now on.

"We have been filling out our forms in keeping with the instructions we received from the integrity commissioner, but I think the Opposition do have a good point -- not withstanding the fact they don't support making their expenses public online -- and we're going to file our expenses directly under our own names," said McGuinty. "Those forms were filled out by staff in the past. All the information is there, but now we'll make sure we file it directly in our own names."

There were another seven cabinet ministers who haven't posted a single expense online since June 2010, said Hudak.

The Liberals said those ministers have submitted their expenses to the integrity commissioner for review, which is required before they are posted online, and blamed the delays on that process.

Ministers weren't trying to "hide" their expenses by having them listed under someone else's name, said Finance Minister Dwight Duncan, one of the seven named by Hudak for not posting expenses.

"That happens because they're probably the ones who did expenses," said Duncan. "We've all submitted them, but apparently there's some slowness in getting all of them out."

However, the Tories said the Liberals were caught red-handed breaking the rules and are trying to blame the integrity commissioner or anyone but themselves.

The debate got personal as Duncan criticized Hudak for expensing Chicken McNuggets while the Opposition dragged up years' old reports on Duncan's expenses, with both parties accusing the other of breaking the rules.

"This government has cleaned up the awful mess of expenditures that were left by that party of entitlement, who abused taxpayers' money on every opportunity they had," said Duncan.

The New Democrats said both the government and the Tories were ignoring the real issues of concern to voters.

"My focus is around the affordability of everyday life, it's around corporate tax giveaways, around the HST that's hurting people in the pocketbook," said NDP Leader Andrea Horwath. "If those two parties want to sling mud back and forth about expenses, then they're welcome to do that."

The Liberals said the integrity commissioner's office had been given approval to hire additional staff, which they expect will quickly clear up the backlog of ministerial expenses waiting for approval.