Catherine McKenney leads Mark Sutcliffe in a tight race for mayor of Ottawa, but a new poll suggests 35 per cent of Ottawa residents remain undecided with less than three weeks left in the municipal election campaign.

The Nanos Research poll for CTV News Ottawa asked respondents, "Who would you vote for if the election was held today?"

Bob Chiarelli ranked third, with nine per cent of respondents saying they would vote for the former mayor of Ottawa.

With less than three weeks left until the Oct. 24 election and advance polls open on Friday, the poll shows more than one in three Ottawa residents say they are still undecided on who to vote for.

In an interview with CTV News Ottawa, Nik Nanos of Nanos Research said while voters are beginning to focus on the two frontrunners, the race is still "up for grabs."

"Basically, it shows that it's a two-and-a-half-person race. You know, McKenney and Sutcliffe at the top, and then Chiarelli, why don't we say, as the half. Right now, at least, voters in the city of Ottawa are clearly focused on those two front-runners," Nanos said Thursday afternoon.

"But still 35 per cent, more than one out of every three, are undecided so this is still a race that is up for grabs."

There are 14 candidates running for mayor of Ottawa in the election. 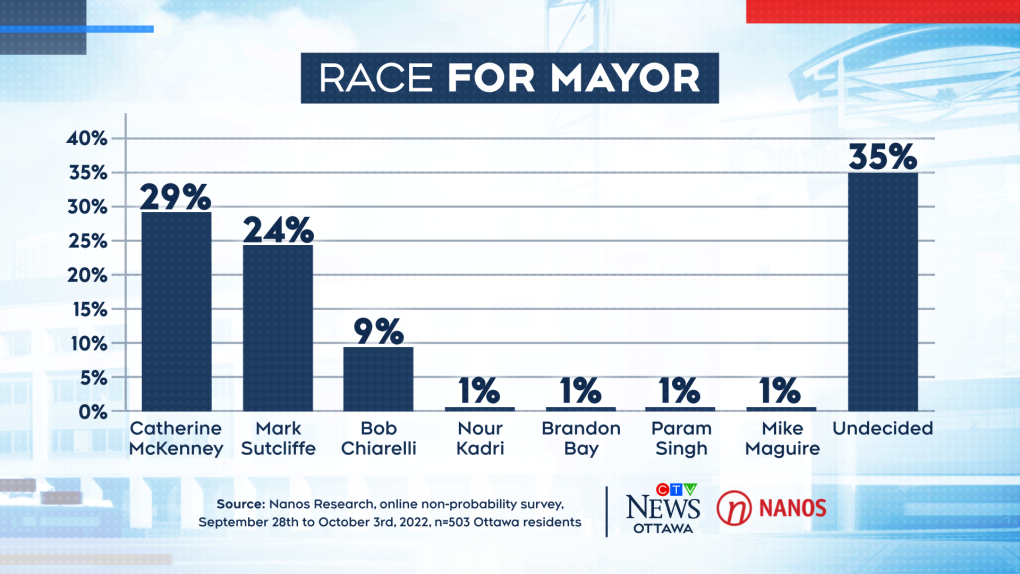 A Nanos Research poll for CTV News Ottawa asked respondents who would you vote for if the Ottawa municipal election was held today. (Nanos Research)

The survey shows 42.9 per cent of respondents living in downtown Ottawa said they would vote for McKenney as mayor, compared to 16.6 per cent for Sutcliffe, while McKenney leads Sutcliffe in the west end 26.4 per cent to 25.3 per cent.

"If we look at the last election, only 43 per cent of people in the city of Ottawa actually cast a ballot so this might look like Sutcliffe perhaps is a little behind but when we look at people who probably will end up voting it could be an advantage for him. So it's all going to come down to a high voter turnout will likely favour McKenney, a lower or regular voter turnout could favour Sutcliffe."

Nanos conducted an online survey of 503 Ottawa residents, 18 years of age and older, between Sept. 23 and Oct. 3.  Nanos conducted a non-probability survey representative of the city, and there is no margin of error.

The Nanos poll is released as the two main contenders for mayor release their campaign financial platforms this week.

McKenney unveiled their financial plan on Thursday morning, promising to cap property taxes at 3 per cent a year.  McKenney's campaign platform includes freezing transit fares and introducing free transit for students under 17, invest an additional $500,000 a year to support community and social service needs, a $250 million plan to fast-track cycling infrastructure over four years using Green Bonds, and promises Ottawa will be net zero by 2050.

Sutcliffe promised to cap property tax increases at 2 to 2.5 per cent in 2023 and 2024, and find between $35 and $60 million in efficiencies at City Hall.  He has also promised to freeze transit fares for one year, cut child and youth recreation fees by 10 per cent, spend $100 million over four years on roads and bike paths and boost funding for community service agencies by $4 million a year.

Both Maguire and Chiarelli have proposed no new tax increase for 2023.

CTV News at Six will host a mayoral debate on Thursday, Oct. 13. Coverage will begin on CTV News at Five, with extended post-debate coverage on CTVNewsOttawa.ca.

Nanos Research says the election race is close, not a statistical tie as previously reported.

Former President Jiang Zemin, who led China out of isolation after the army crushed the Tiananmen Square pro-democracy protests in 1989 and supported economic reforms that led to a decade of explosive growth, died Wednesday. He was 96.