OTTAWA -- The chair of Ottawa’s Transit Commission says “my patience is gone” after a series of issues kept some riders on a Confederation Line train for an hour on Thursday afternoon.

“I don’t have any patience left for this at all,” Hubley told CTV News Ottawa Friday morning. 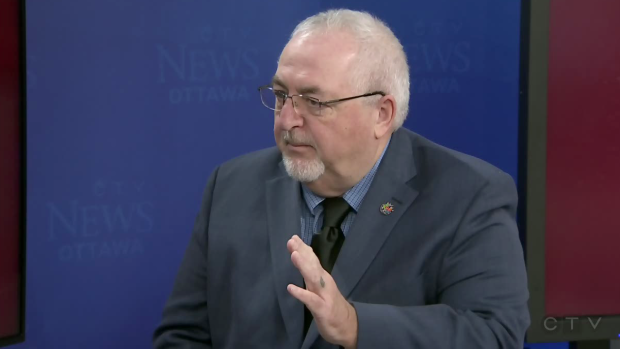 “It’s time to get in there ahead of time, do the preventive maintenance that’s been prescribed for these trains. Get it done, so that our riders don’t have these inconveniences.”

In a memo to Councillors Friday morning, Transportation Services general manager John Manconi outlined the issues that happened during the peak period.

“There were several issues that were experienced along the Confederation Line impacting customers across the system,” Manconi wrote.

“The operator attempted to clear the fault, but could not. RTG technicians were dispatched and OC Transpo implemented plans to maintain service to customers,” Manconi wrote.

The OC Transpo general manager says the train eventually proceeded into Blair station, but it took almost 30 minutes as “the fault required the train to move very slowly.”

Manconi added “we recognize that this would have been frustrating delay for customers on the train, especially after experiencing a delay earlier in their trip at Rideau Station. Combined, this resulted in these customers trip time one hour on this train compared to a total end to end trip time of 24 minutes.,”

There was also a door fault on a separate train downtown during the same period, causing some delays.

It’s been another week of issues along the five-month-old Confederation Line.

On Monday, OC Transpo reported longer travel times due to a door issue at Bayview Station.

On Wednesday, OC Transpo reported issues with the on-platform displays at the LRT Stations, a switch issue at Blair station and a door issue with a train at Parliament station.

On Thursday, Rideau Transit Maintenance reported brake faults with a number of trains in the maintenance yard during the morning launch.

A memo from the City of Ottawa said “there was a minor electrical cord smoke fire in a switch room in the maintenance facility.” Rideau Transit Maintenance says the fire was minor, and there was no equipment damage.

Wright-Gilbert added “I have had enough of the excuses, task forces, apologies, delays, inconveniences, a complete lack of communication and transparency, and failings.”

*THREAD*
I have had enough. Brakes, doors, onboard computers, power connectors, flat wheels, odours, transponders, freezing stations, pieces coming off of the trains. 1/9

I have had enough of the excuses, task forces, apologies, delays, inconveniences, a complete lack of communication and transparency, and failings. 4/9