Recognizing the need for help in Ukraine, seniors from an Ottawa retirement have stepped up, proving you’re never too old—or too far away—to help.

When residents of the Riverpath Retirement Community saw what was happening in Ukraine, they did what they could.

"We were very disturbed by what was going on  in Ukraine,” says 93 year-old resident Pauline Trudel. “And so, we thought we would do something about it - and we did.”

Did they ever. Residents raised money— "an awful liot of money," Trudel said.

“As we were counting the money, we were more and more surprised.”

“I had the idea, and I asked the director; she said go ahead, and I formed a committee.”

The committee wrote letters to residents, setup a donation box and raised over $18,000 at Riverpath; the remainder was raised by a few of the other Riverstone Communities.

The giving didn’t stop with residents. Riverstone Retirement Communities, who have locations throughout the city, got involved too,

“We said right from the start that we’ll match what they’re going to raise,” said Mike Traub, Riverstone Retirement Community vice-president, “We do that a lot for different charities; we’ve never seen so much money come in. So we capped it at $25,000 thinking that was a reasonable amount to put into it — but  we were surprised at how much they were raising.” 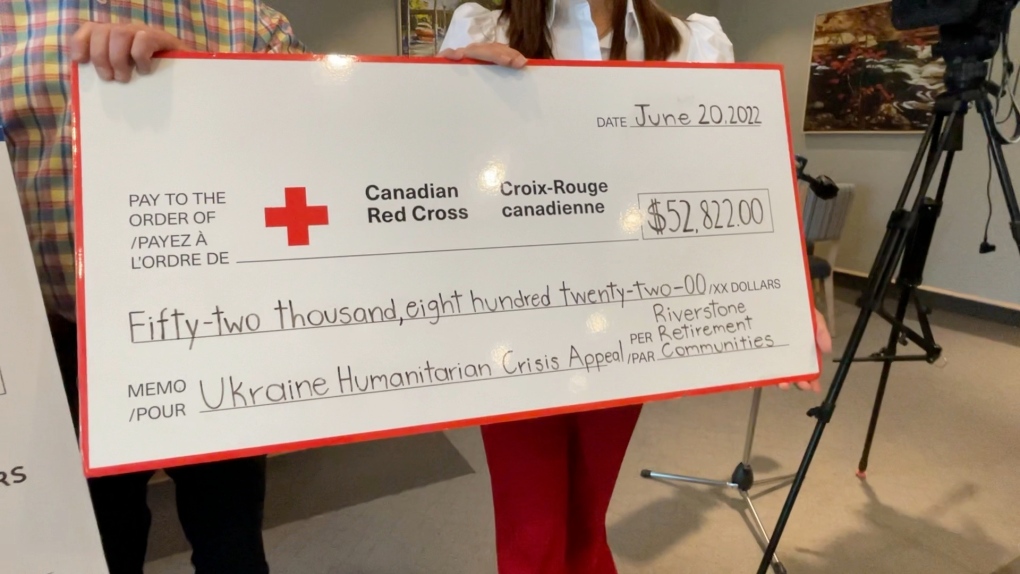 “Donations are vital to the Ukrainian community humanitarian crisis appeal,” Alexia Barco, Red Cross Community Engagement Associate, told CTV News at a cheque presentation Monday. "As the red cross movement continues its work abroad, it’s incredibly powerful to know that there communities like them standing beside them with support, so we are super grateful.”

“If you look at the mothers and their children, and the elder people, trying to escape the disaster that’s going over there, they need some help; and, I think the residents in a very modest way realize that and made their contribution."