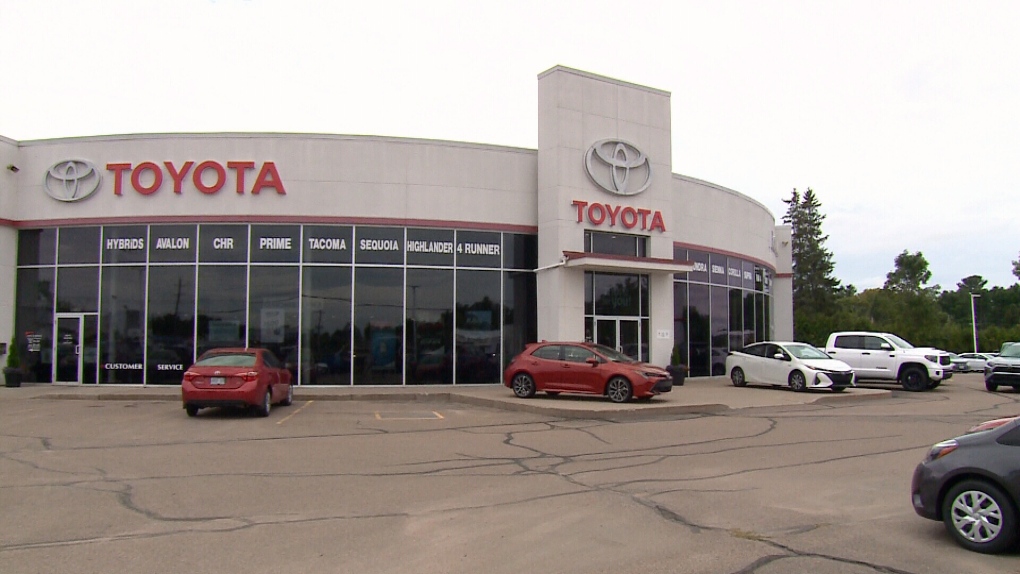 CTV news has learned that several Toyota dealerships throughout eastern Ontario have been hit by professional thieves. At least 5 dealerships have reported some 25 vehicles stolen over a period of months, the latest in Pembroke where 7 vehicles disappeared in the middle of the night.

These are luxury vehicles: Toyota Highlanders, 4Runners, and Tacomas; each worth $50,000 and up. These thieves knew exactly what vehicles they were going for and wasted little time getting them.

Petawawa Toyota General Manager Mike Douglas is still shocked by the brazen auto theft at his dealership in Pembroke early Thursday morning.  It is the first time in his career here something like this has happened.

Surveillance footage now in the hands of police shows several people arriving at 3 a.m.  Within minutes they drive off with 7 vehicles worth about $400,000, one of them stolen right from the entrance to the show room.

“They spot the cars they will take,” Douglas says, “They go out back, pre-program something into laptops so they can get in and out. The police tell us it is less than to and a half minutes to get car started and gone.”

The General Manager of Kanata Toyota has a similar story.  Ben George says they lost two Highlanders and four 4-runners June 24, despite gates and high-end cameras. He shows the expensive lock that secured the gate, cut in seconds like butter.

“They knew exactly what we had here,” George says, “Everybody was covered, gloved. That tells me it was organized, absolutely organized.  And they have a customer.  These are sold long before they're ever stolen from us.”

In all some 25 high-end Toyota vehicles have disappeared off dealership lots in less than a year.

Hawkesbury Toyota was hit three times starting last November, losing 6 vehicles in all, along with 5 damaged.

The first weekend of April, 2 Highlanders were stolen in Cornwall and 2 others damaged.

In June, thieves hit the Kanata Toyota and made off with 6 SUV's.

In July, the 1000 Islands dealership had 7 stolen including Highlanders, 4Runners and a Tacoma.

And now the 7 stolen in Pembroke.  The owners of these dealerships are talking amongst themselves trying to find solutions.  Some say they’ve removed car parts to disable the vehicles, even placing less expensive cars in front but that didn't thwart thieves at the dealership in Hawkesbury. They smashed five cars in their efforts to get to the luxury vehicles they were after.

Hawkesbury Toyota captured images of the thieves August 4th who made off with two Highlanders after smashing their way through.

The belief is these stolen vehicles are being driven to Montreal where they're shipped to either Asia or Africa.

Ontario Provincial Police say they are working with other detachments to find out if there's a link but so far no leads.

So for now dealerships are looking for low tech solutions like a steering wheel club to thwart these high tech thieves.

“We would like to know what we can do to stop it,” says Mike Douglas, “but common denominator is to put a Club on the cars, something that is archaic actually to stop them from stealing them.”

CTV Ottawa did similar stories last year on homeowners losing their Highlanders and Lexus vehicles from their driveways. The general manager of the dealership in Cornwall says after thieves stole two of their vehicles on the lot, his own Highlander was lifted off his driveway a week later.