These two Ottawa roads are among the worst in Ontario

These two Ottawa roads are among the worst in Ontario

Two Ottawa roads are among the 10 worst in Ontario, according to CAA’s annual 'Worst Roads' campaign.

Ontario residents vote in the annual campaign on roads in their communities. Criteria include congestion, potholes and poor signage. This year’s campaign saw about 3,000 roads across the province get nominations.

Carling Avenue has appeared on the list many times over the years. It was voted the second-worst road in Ontario last year, and has been voted Ottawa's worst road four years running.

“Oh, it’s like being in the middle of a rodeo, that’s what it’s like; it’s just bumpty-bumpty-bumpty,” says Ottawa resident Tara Neville.

“It’s not my favourite place to drive,” added Kathleen Bouchard. “It’s a little confusing with the different way the lanes are laid out. I find there’s a lot of potholes on Carling Avenue, and there always seems to be construction going on.”

Barton Street in Hamilton took the number one spot on the list this year, with Eglinton Avenue West in Toronto placing second. Of the 10 worst roads, five are in the Greater Toronto Area.

The CAA also breaks down the worst roads by municipality. Here are the five worst in Ottawa this year:

CAA says the campaign helps shine a spotlight on where more work is needed, and can help influence governments to fund repaving and repair work.

"We know the campaign works," Jeff Walker, President and CEO of CAA North & East Ontario, said in a news release. "People vote in the annual CAA Worst Roads Campaign because it gives Ontarians a platform to continue putting pressure on various levels of government to understand what roads they believe are in urgent need of repair."

Eighty per cent of voters cited potholes as a reason for selecting a roads, followed by poor road maintenance (71 per cent) and no or poor cycling infrastructure (29 per cent).

The city of Ottawa says Carling Avenue is a long, and well-travelled road.

"Carling Avenue is a 19-kilometre roadway which accommodates a very large number of daily users. Not all of Carling Avenue was constructed in the same manner. The road varies in width from a two-lane rural cross-section with ditches to a six-lane arterial with dedicated transit lanes," said Gen Nielsen, manager of asset management in a statement to CTV News Ottawa.

"Though some sections of Carling have poor pavement condition, since 2006, the City has consistently rehabilitated the worst sections." 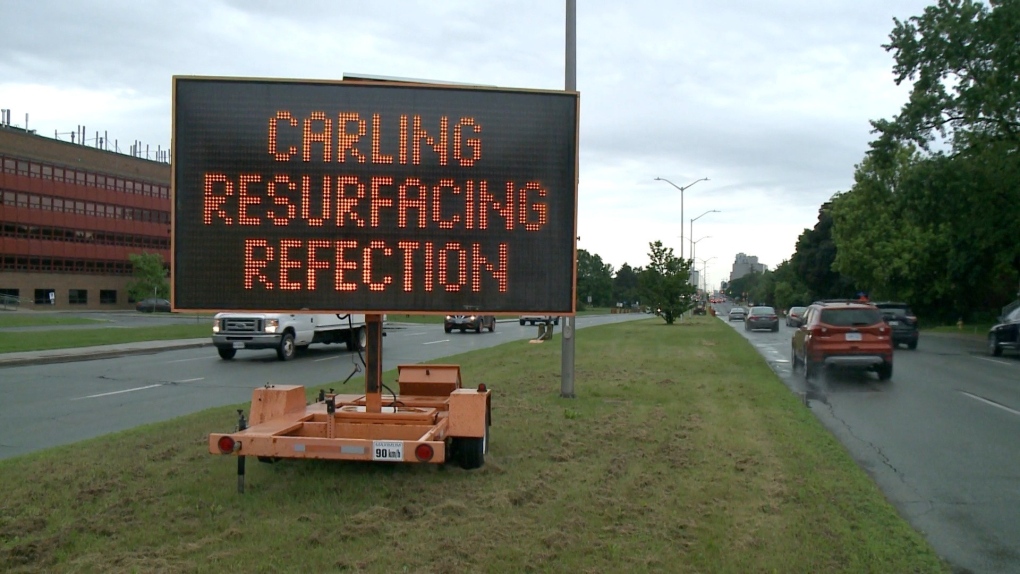 Resurfacing work is taking place on parts of Carling Avenue, which has been voted one of the worst roads in Ontario. (Jim O'Grady/CTV News Ottawa)

The city says resurfacing work on Carling Avenue from Merivale Road to Melrose Avenue and from Booth Street to Bronson Avenue is taking place this year.

“I know the city is addressing many of these things, but we do have some arterial roads that are really are in bad shape or need some attention, some funding from the province," Beun said. "That’s really what CAA Worst Roads is all about, is making these lists and getting that information to the people who make the decisions.”