'That is a lie': Basil Borutski calls Judge a liar and says he’s 'not guilty' during courtroom rant 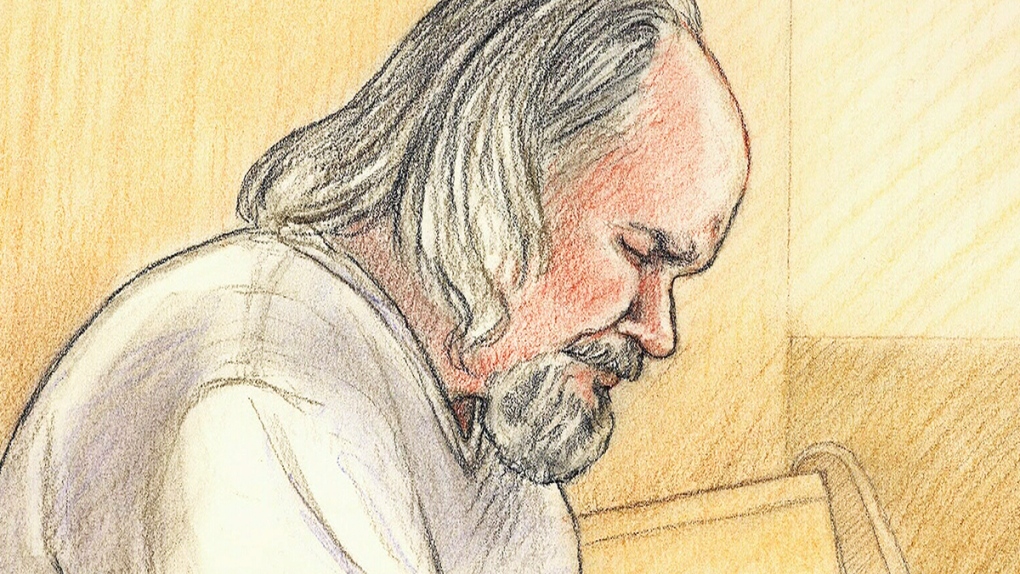 Artist sketch of Basil Borutski as seen in an Ottawa courtroom on Monday, Oc.t 2, 2017. Borutski is on trial for three first-degree murder charges in the deaths of Carol Culleton, 66, Anastasia Kuzyk, 36, and Nathalie Warmerdam, 48, whose bodies were found in separate crime scenes in and around Wilno, Ont., on Sept. 22, 2015. (Credit: Lauren Foster-MacLeod)

Basil Borutski stayed silent for the entire six-week trial, except on the final day, just hours before jury deliberations. When the jury was absent, Borutski called the Judge, Justice Robert Maranger a liar, said “I’m not guilty” and claimed he wasn’t given a fair trial during a courtroom outburst.

Below is the transcript of the eight-minute exchange between the accused Basil Borutski, the Judge Justice Robert Maranger, the court-appointed Amicus Curiae James Foord and Crown Attorney Jeffrey Richardson.

Justice Robert Maranger: “No it didn’t happen because I never did that and I never said I’d do that. I gave you instructions especially not in front of the jury…”

Borutski: “You can talk to, the whoever, registrar. You did say that, and I was waiting for that. So that’s not going to happen then?”

Borutski: “I do not believe you’ve done it in front of the jury.”

Maranger: “Okay. Alright. Well I have no means of correcting it Mr. Borutski. I’m going to complete the jury charge because I take the position and I think the record will reflect in no uncertain terms in every instance I’ve afforded you the opportunity to ask questions of witnesses and at every instance I afforded you the opportunity to speak. At every instance I asked you if you had any questions about anything that would be conducted throughout the entire proceeding. I believe I was methodical and careful, if ever I made the mistake of not asking you, which may have occurred three or four times throughout the six weeks, Mr. Foord, in his capacity of Amicus, clearly and unequivocally reminded me. So that’s my answer to your question.”

Borutski: “None of that answers the question. I’m talking about you said you were gonna explain that in front of the jury. And I have no pencil, no paper, no way of taking notes to be able to go back (inaudible) and remember stuff like that.”

Maranger: “Well I stand by what I just said Mr. Borutski, and furthermore the explanation that I gave to you at the start of the trial, and I repeated to you in part in mid-trial, about how you may want to conduct yourself during the trial wasn’t something to be done in front of the jury, if anything that may have prejudiced, I purposely didn’t do it in front of the jury. So I take what you say, but it has nothing to do with the continuation of the trial at this stage of the proceedings, so I’m simply going to complete the jury charge.”

Borutski: “You’re still not answering the question, I’m talking about a couple of days ago, you said you were going to, so I was ready for that and waiting for that.”

Borutski: “You’ve also said that the reason I don’t have a lawyer or I’m representing myself is because I don’t need one. That is far from the reason.”

Maranger: “I didn’t say that.”

Borutski: “That is far from the reason. That’s…”

Maranger: “Well, I’m not going to debate with you. It’s now… I’m charging the jury and you’re waiting until now to bring this up?”

Maranger: “It’s not going to fly.”

Borutski: “You said at any time I can put up my hand and talk.”

Maranger: (to crown and amicus) “Any recommendations?”

Borutski: “If I’m representing myself why wasn’t I given a paper or pencil from the beginning to take notes? How am I supposed to do this? It’s impossible to represent myself.”

Maranger: “How many times during the course of this trial Mr. Borutski did I ask you ‘do you have any questions? Do you need anything?’ At this stage of the game for you to be saying you didn’t have a pencil and paper just falls short.”

Borutski: “Everybody here has a pencil and paper.”

Maranger: “Ya and we would have given you one if you asked.”

Borutski: “The very basis of a fair trial would be that I would have the same. I don’t have a computer in front of me, I don’t have a pen or paper and I’m supposed to be able to represent myself? No.”

James Foord: "I would only say this is my recollection of the record is that I agree with Your Honour’s comments about how consistently you’ve dedicated that if there are any questions or issues he raise them. My recollection of the procedures in this case specifically with respect to asking questions to witnesses is that he was asked every time in front of the jury. You asked about a closing address, he was asked in front of the jury. You (Borutski) didn’t react, not that he said yes or no, he didn’t react. With respect to pencil and paper, the record will reflect the day Ron Ethier (witness) gave tesitimony, for the first time Mr. Borutski knocked on the glass and asked for a pencil by action. The Special Constable provided a pencil. In addition, papers were provided throughout by way of disclosure and paper was consistently being handed to him every single day, maybe there were some days we didn’t have it, so for the record I think that background supports Your Honour’s position. That’s all I’m saying.”

Maranger: “Thank You. Let’s get the jury.”

Borutski: “I suggest then that you tell the jury that the reason I am not, that you think that I’m self-represented, it’s not because I don’t have to.”

Maranger: “I didn’t say you didn’t have to. I said that they’re not to take anything from it. I maintain that that’s the proper instruction. I’m not going to variate. Thank you for your suggestion.”

Borutski: “Read what you said. You’re saying exactly what I’m saying that that’s the reason you told the jury today. That is why, I’m not speaking. That is not true. That is a lie on your part.”

The jury then enters courtroom 34. Borutski is once again silent. Justice Maranger finishes his jury charge. About one hour later the jury leaves to begin deliberations. Once the jury is dismissed, Borutski and Justice Maranger begin another exchange.

Maranger: “Questions about the charge (to the jury) Mr. Borutski?”

Maranger: “What’s that? You’re not guilty? That’s the plea that was required at the start of the trial. It’s in the jury’s hands now Mr. Borutski.” 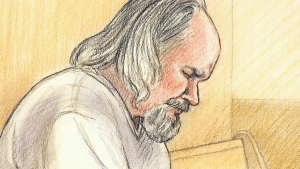