BROCKVILLE -- The Brockville Concert Band (BCB) is back rehearsing with a small group of members in person, following health protocols from the local health unit.

But some members are also able to join from their home to keep their musical skills polished, attending rehearsals over the online meeting hub, Zoom.

"It disappointed a lot of people at the beginning (of the pandemic) because it's more than just the music, right? It's the social part," said BCB conductor Lance Besharah.

The band executive committee thought outside the box and tinkered with members joining through on Zoom last summer, but ran into technological difficulties.

"The trouble was Lance could not conduct us because of the lag time," said Karen Mahon, a flutist who has been joining the band on Zoom from the comfort of her basement.

"Some people were not very comfortable and all of us had to learn Zoom. The initial attempt wasn't as successful, there's sometimes our issues with internet speed. The delay of the sound is a problem," Mahon said.

"While it was a little bit of practicing and we could see each others face and catch up with our friends, it wasn't the greatest. We did it to the summer break," Mahon said. 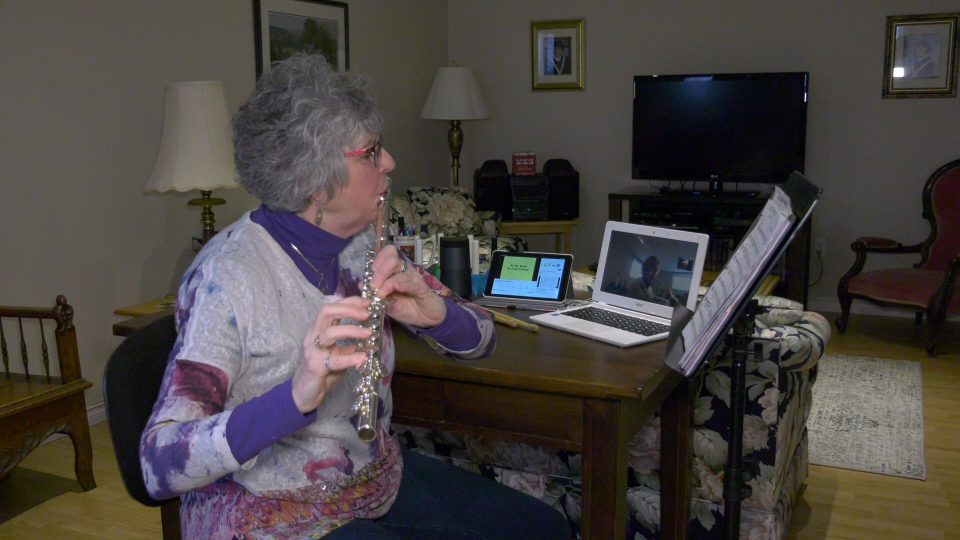 The committee kept working on the Zoom meetings throughout the fall and kept making it better.

"There's a lot of changes and every week we try something new, to see if we can make it a little better...It keeps getting better , it's a long process," said Besharah, with the band in it's third week back from winter break.

"When we are on Zoom, we are actually hearing our own musicians playing our music. Lance is conducting them live, so we're hearing them live and it's in sync so we can play at home which is great or us," said Mahon.

Around 12 to 14 members get together in person at a Brockville church every Tuesday, and say they are excited to have their members practicing from home re-join the group.

"Well it's nice because you can see and hear everybody and you can play along," said David Hain, a euphonium player in the band.

"They have their microphones turned off so they are really playing with another band and they really do feel as though they are a part of it," Hain said.

"I've done it (over Zoom), I've enjoyed it. You're reacting to the instructions from the conductor which is great." 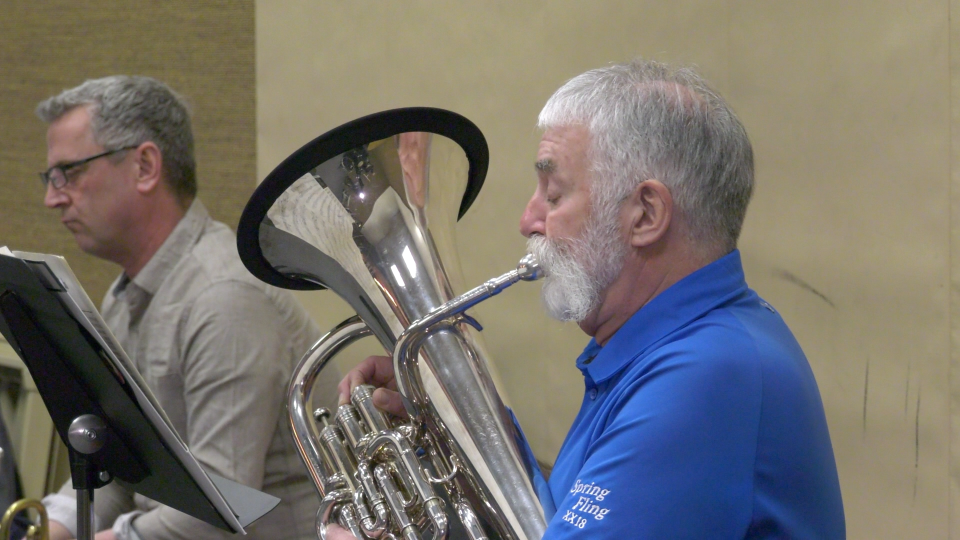 Some of the instruments have had modifications added to reduce the spray aerosol.

"We have this sort of stretchy cloth thing over the bell of the instrument so all the air that goes in there, that originates in my lungs, is going to come out there and gets trapped or dispersed here," Hain said "It muffles the sound a little bit but not bad. For the brass instruments, that's very easy to fix."

Besharah said the band does miss playing live shows, and only managed to play one virtual concert around Christmas, but having everyone together again is promising.

"I have the monitor in front of me so I can see whose there, and I can talk to people at home, while I'm rehearsing, or conducting and make silly comments to keep them included, keep them focused on what's going on," Besharah said.

"They're a dedicated bunch. The sort of average age of our group is probably 40 plus. But all of them, they started in high school, took time out, had kids, job, whatever, they came back to it because it's always meant something," Besharah said, adding the band is comprised of around 60 members.

"It's a huge thing," added Mahon. "All of us, everyone of course was confined to our homes so much of the time, losing our special interests and music is such a great pastime. It's a great way to meet other people as well."

Mahon also noted that playing over Zoom does have its pros.

"They can't hear me playing! If I make a mistake its ok, nobody can hear me unless I forget to mute my mic which happens sometimes. We have a bit of fun with that," Mahon said with a chuckle.

"I'll be glad when it's over like so many other people," added Besharah, understanding the new normal might look different.

"I think once we're allowed to get a little closer, a few numbers more it's going to make a huge difference for some of the people to get that social aspect back. That's really important," he added.

"Music is for a lifetime, it's not something you just do once in a while. Physical health helps, but it doesn't hinder either because we have handicapped members and so on, so it's good for everybody," Besharah said.