The City of Brockville got back into the festival swing this weekend for the first time in 2022, with the waterfront welcoming tall ships from around the world.

Thousands of people flocked to Blockhouse Island on Saturday for a chance to get up close and personal with history at the Brockville Tall Ships Festival, which only occurs every three years.

"We knew that this year was going to boom and we're so happy to see everything alive and vibrant," said Brockville Tourism Manager Sarah Laturnus, looking over the crowd.

"This is so incredible, so important to Brockville, for our region, it's only 9:30 in the morning and the park is packed already!" she added.

The long lineups not deterring people from checking out the boats from all over the world.

"We'll make the most of it," said Heather from Ottawa. "Summer is short and it's a beautiful day. I've actually never been before so it's the first tall ships festival for me."

"We went on Theodore Tugboat already so I think some peoples highlight are already achieved," she said, looking over at her daughter. 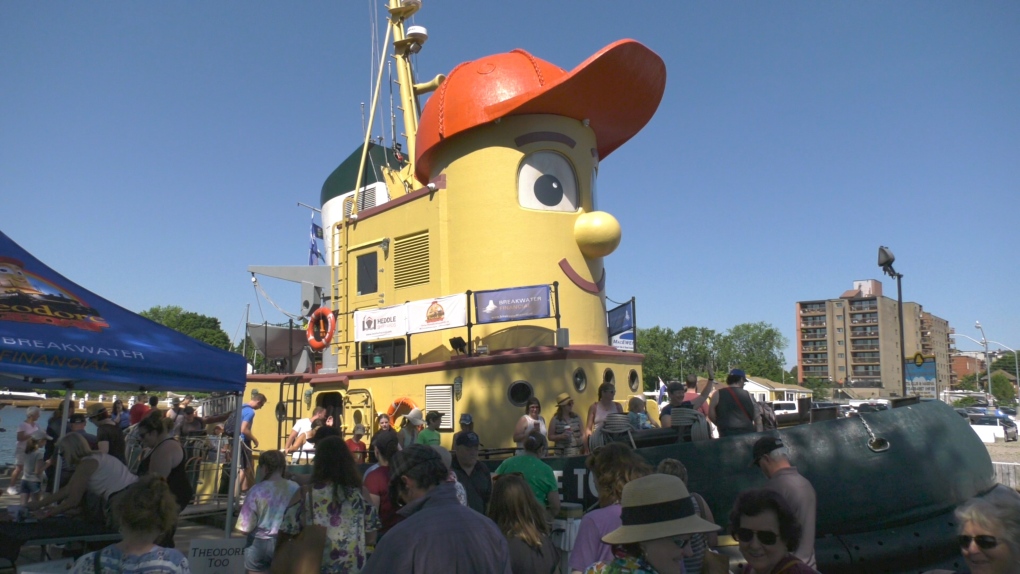 Theodore Too, a popular draw for families, but one of the biggest lineups was for the Nao Trinidad from Spain.

"This was the flagship in Magellan Expedition 500 years ago and we are celebrating the commemoration of the very first circumnavigation of the globe," said project manager with the ship Angel Rosa.

The ship left Italy in May, taking almost two months to arrive in North America.

"The faces of the people, they are amazed like, 'Whoa this is for real? You really did sail to here?'", Rosa said. "You have a feeling like travelling through time barriers."

One of the most interesting pieces of the ship is what's called a whipstaff.

"She's like a leverage system so it's very simple, it only has two options on port and the starboard side," he added.

Brockville is the first port of call for the Nao Trinidad and its 14 crew members. It is off to Sandusky, Ohio when the festival wraps.

"It feels like being alive again, being back to almost normal," Rosa added. "We are very excited seeing people. We feel very welcomed here in Brockville, Ontario."

Even a couple twin boys dressed up as pirates managed to sneak aboard.

"It feels good," said their father Jessy from Ottawa. "The boys have been excited for this event and now we're here."

An invasive species was also on display by Great Lakes Fishery Commission out of Michigan, wowing families through a fish tank.

"Sea lampreys are a parasitic fish that invaded from the Atlantic Ocean in the early 1800s," said Ross Shaw with the Commission.

"They were only in Lake Ontario until about the 1920s when the Welland Canal was widened and deepened to allow ships to bypass Niagara Falls," Shaw said.

"Of course, the sea lampreys could bypass the falls so they proliferated to the rest of the Great Lakes by the 1930s and then wreaked havoc on the commercial recreational and tribal fisheries of the day," he added.

While the species it not harmful to humans, they can kill about 40 pounds of fish in a 12 to 18 month period.

"They latch on to the side of fish and drink their blood and bodily fluids. Sea lampreys will not attack humans because we are warm blooded creatures, they prefer the cold blood of fish," Shaw said, demonstrating the lampreys suction on his hand.

"They have about 4 times more suction than your household vacuum cleaner." 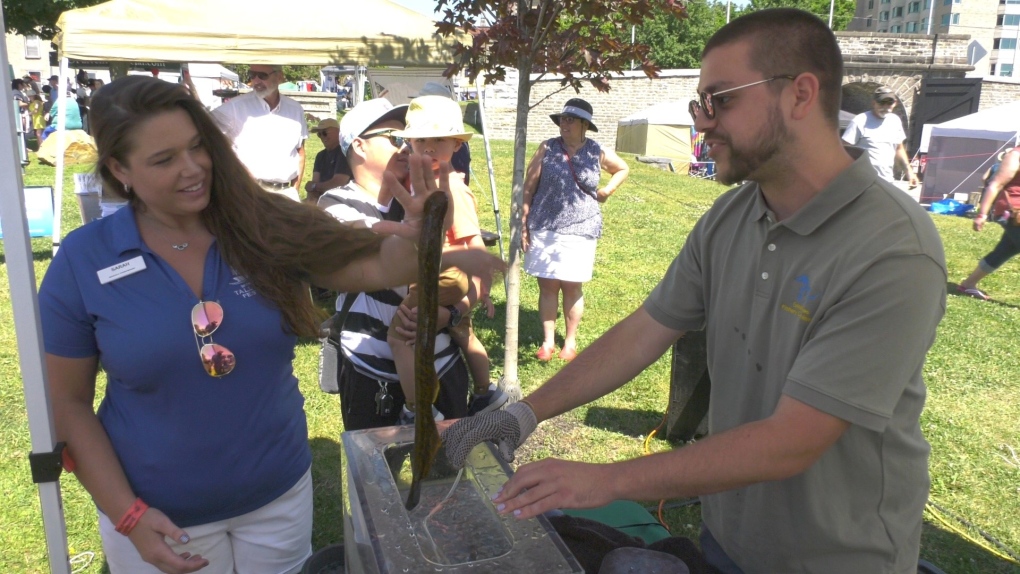 The Commission was established in response to the sea lamprey invasion, and uses a selective pesticide to target their larval stage, achieving a 95-98 per cent effectiveness with little to no non-target mortality, according to Shaw.

Over in Hardy Park, there was more to see, including a display by the Leeds County Draft Horse Club and the Canadian Coast Guard hovercraft Mamilossa.

"We have four of these in Canada, there's two in Vancouver and two in Trois Rivières," said Captain Marty Robitaille. "A lot of people didn't realize that we have a hovercraft in Canada and definitely not that big. We are 94 feet long, 40 feet wide. It's impressive."

The three main programs for the hovercraft include buoy tending, search and rescue, and ice breaking.

"We do ice breaking for the commercial channels and we also do the ice breaking the river to prevent flooding," Robitaille said.

This is the farthest a Canadian Coast Guard hovercraft has been up the seaway since 1998, according to Robitaille.

Festival Chair Brian Burns said he was overwhelmed with the turnout so far on the weekend, already doubling ticket sales from 2019.

"Even in 2019 when we had the Bluenose here, we've sold over 5,000, probably 5,500, of the 8,000 passports that we have printed in advance," Burns said. "It makes me feel great in a way, but we hope we haven’t sold so many that people have trouble actually getting on the ships!"

He noted the weather forecast helped with nothing but sun on Saturday morning.

"People are just anxious to get out and do something because they've been locked up for a couple of years and so many are choosing our festival," Burns said.

"You look around the park and everybody has a smile on and we have so much more than just the tall ships," he added. "You see so many smiles almost zero complaints which is great."

The festival wraps up on Sunday June 26 with general admission armbands being sold for $10.

When schools in one North Carolina county reopen later this month, new security measures will include stocking AR-15 rifles for school resource officers to use in the event of an active shooter.