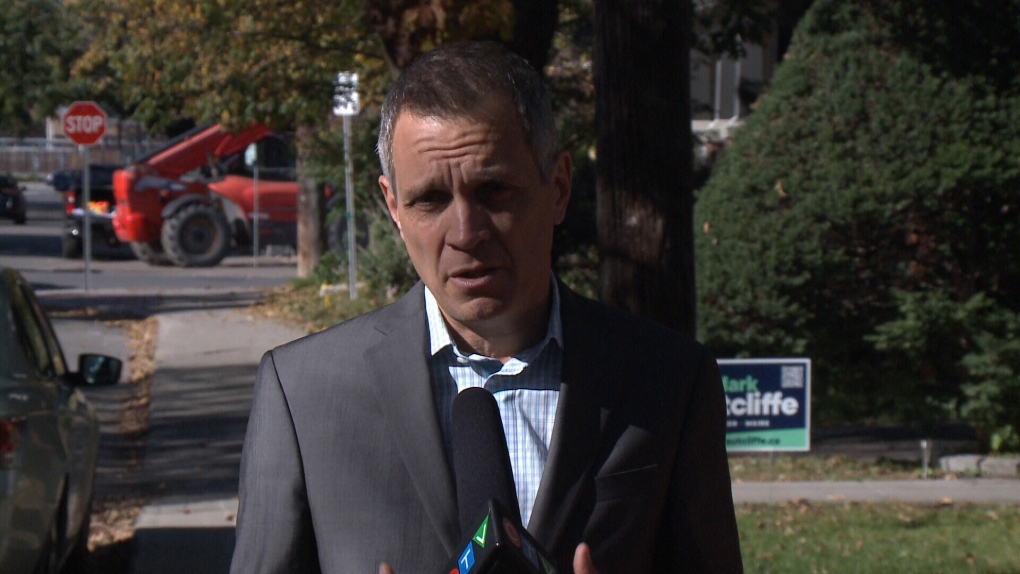 In a news release Monday, Sutcliffe said Ottawa is facing “significant challenges” in the downtown core.

"Small business owners I've spoken with have told me what they need is more people. We should be doing everything we can to get more people living and visiting downtown and eliminate anything that discourages it,” he said.

Sutcliffe said, if elected mayor, he would reduce or remove application fees and development charges to convert vacant office space to affordable housing, and would seek $30 million from the federal government to aid in converting its office buildings to housing.

He would also continue the city’s plan to reduce patio fees and relax rules that allow sidewalk patios and sidewalk sales for downtown businesses. He added that he would facilitate a Gatineau LRT connection to Ottawa’s LRT.

He also said he would “reject calls to raise parking fees or introduce ‘congestion charges’ to come downtown.”

Finally, Sutcliffe said he would work with the federal government to create a vibrant parliamentary precinct that “serves as a grand national gathering place that invites Canadians and others from around the world to our capital city.”

Sutcliffe has said he would release his full financial plan in the coming days.

“The ByWard Market used to be the crown jewel of Ottawa, for residents and tourists. Under my leadership, we will restore it to its past glory,” stated Sutcliffe. “We can’t continue to ignore the safety issues that are acutely felt in this neighbourhood. I am the only candidate with a targeted plan and a commitment that is focused on the ByWard Market.”

He said he would review the mandate and operations of the city’s Services Corporation that runs the ByWard Market; increase walkways, car-free zones and public seating; bring more farmers, artisans, and buskers to the area; and establish a permanent ByWard Market cleaning crew.

Sutcliffe also said he would strike a task force within 30 days of being sworn in to recommend solutions ahead of the 2023 budget process for responding to mental illness and substance use disorders, and reiterated his plan to increase police presence and install CCTV cameras in select areas to deal with crime.

Critics have argued Sutclfife’s plan to increase policing in the Market would put vulnerable people at risk of further marginalization and possibly violence. In a statement to CTV News Ottawa, his campaign said he would strike a balanced approach.

“Mark’s plan provides a balance between increasing the presence of law enforcement, as well as that of social services, in at-risk neighbourhoods,” the statement said. “In addition to hiring 100 more positions at OPS, Mark has also pledged to invest directly to community and social service organizations to support our most vulnerable, with a specific focus mental health and substance use disorder.”

The campaign said more details would be released this week.

Election Day is Oct. 24, but there will be advanced polls open this Friday and next Friday.

A judge has acquitted Maj.-Gen. Dany Fortin of sexual assault over an allegation that dates back to 1988. The allegation stemmed from his time at the military college in St-Jean-sur-Richelieu, Que., which the complainant also attended.

'Doesn't line up': MPs challenge minister over instances of MAID offered to veterans

Veterans Affairs Minister Lawrence MacAulay was challenged by MPs on Monday about how the federal government is handling the growing number of veterans who've reported being offered medical assistance in dying.

Just days after introducing her first bill as Alberta’s premier, Danielle Smith says she is prepared to make changes after widespread criticism that the legislation grants unchecked power.

Prince Harry said the royal household regularly leak stories about each other, calling it 'a dirty game' in a new trailer released on Monday for the much-anticipated Netflix documentary series about him and his wife Meghan.

An Alberta mother is recounting her experience arriving at a packed children's hospital when her young daughter was in dire need of help.

Prime Minister Justin Trudeau says he is listening to concerns that some of the firearms his government is looking to ban are in fact used more for hunting.

Hundreds of people gathered on Sunday night to honour four Indigenous women believed to have been murdered by an alleged serial killer.

Prime Minister Justin Trudeau and Ontario Premier Doug Fourd were in in Ingersoll, Ont. Monday to make an announcement about electrical vehicle manufacturing.