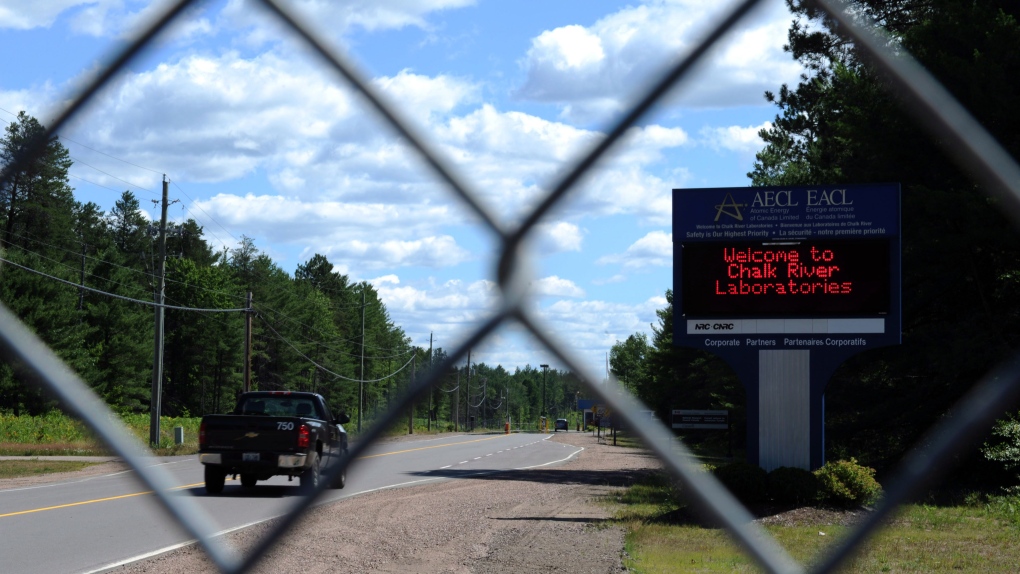 A sign welcomes people at the entrance to the Chalk River Laboratories nuclear plant in Chalk River, Ont., on Monday, July 9, 2012. (Sean Kilpatrick / THE CANADIAN PRESS)

CHALK RIVER, ONT. -- A suspected outbreak of COVID-19 has been declared at Canadian Nuclear Laboratories (CNL) in Chalk River after two employees tested positive for the virus.

The Renfrew County and District Health Unit (RCDHU) said it's working closely with CNL to identify close contacts of the employees, who have been told to self-isolate at home and to get tested.

It also reminded those deemed high-risk contacts must self-isolate and monitor for symptoms for 14 days even if they've had a negative test, as it says COVID-19 could be incubating at the time of testing and that residents should not return to work, school or any public places during this time.

Speaking to CTV News by phone, Medical Supervisor for the CNL Health Centre Rosetta McGirl said that while both employees worked in the same building, there is not yet evidence that one employee transmitted the virus to the other; however, they are treating the situation as an outbreak, regardless.

"We're following all the same measures as if it were an outbreak. We want to be extremely cautious," McGirl said.

Three buildings at the Chalk River campus have been closed down for a thorough cleaning and 80 employees were sent home as a precaution. McGirl said, of those 80, two people have been told to self-isolate in addition to the two employees who tested positive. The names of all employees have been given to the RCDHU for contact tracing.

Employees who can work from home will be able to do so in the meatime. For those who cannot, their time off will be covered as a paid leave, McGirl said.

These are the first two cases of COVID-19 at the Chalk River facility, though there have been isolated cases at CNL facilities in Port Hope, Ont. and in Manitoba. Each of those sites saw only a single case in September with no workplace transmission.

Operations and business at the Chalk River facility will continue as normal, McGirl said.

"Because we're a very large campus with multiple buildings, it means we can isolate the positive cases. None of our services are hindered and all business continues," she said.

News of the outbreak came as Renfrew County reported two new cases of the virus on Monday to push the total to 12 active cases in the area. One patient remains in hospital.

Three long-term care homes in the area also remain in outbreak status, including Marianhill in Pembroke and Grove Nursing Home in Arnprior after one staff member at each facility has tested positive since last Friday. Both employees are in self-isolation.

Groves Park Lodge in Pembroke also remains in outbreak status since last week but it's not clear how many cases have been linked to the facility, but the Pembroke Observer reports that one staff member tested positive on Oct. 23 and remains in self-isolation for 14 days after a second test result was negative.