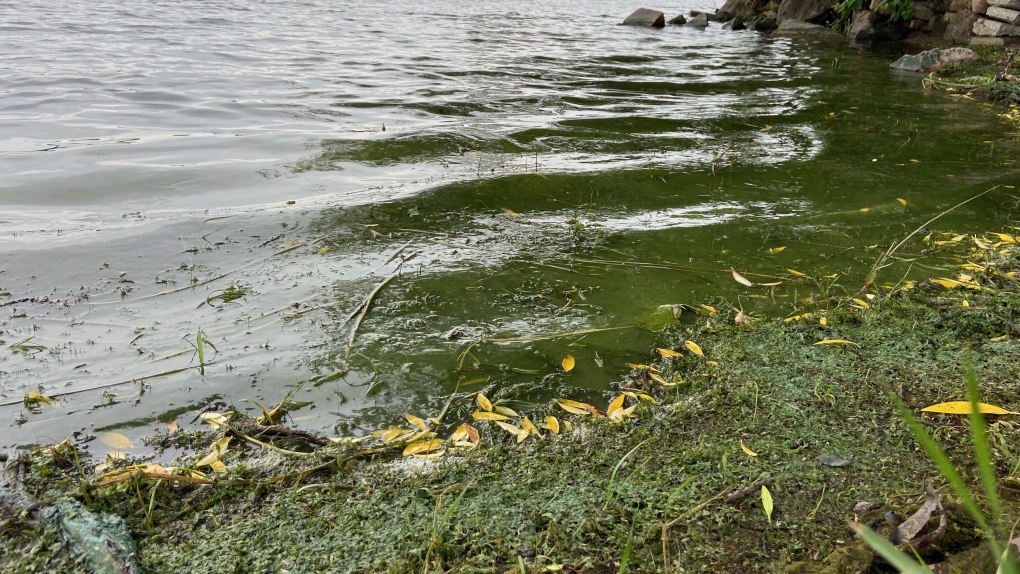 The Renfrew County and District Health Unit is warning residents near Muskrat Lake of a suspected blue-green algae bloom, which may be toxic. (Dylan Dyson/CTV News Ottawa)

The Renfrew County and District Health Unit is advising residents of Cobden and the surrounding area of a possible harmful algae bloom found in Muskrat Lake.

In a news release, the RCDHU said a plant-like substance was spotted on the surface of the lake recently which resembles a blue-green algae bloom. Testing is underway to determine whether the bloom is harmful.

“[The Ontario Clean Water Agency] is also regularly sampling at the Cobden water treatment plant to ensure the drinking water is safe to consume,” the RCDHU said.

The Township of Whitewater Region says Cobden Beach will be closed to swimming and recreational purposes until test results are received. It notes, however, that the municipal water supply is not affected.

Blue-green algae blooms are potentially toxic. They release toxins into the water when they’re damaged or when they start to decay. Direct contact can cause skin irritation and affected water can cause vomiting, nausea, diarrhea and abdominal pain if ingested in higher concentrations.

RCDHU advises people using Muskrat Lake to be on the lookout for algae blooms. If a bloom is visible, please take the following precautions:

The RCDHU says it will continue to monitor the water conditions on Muskrat Lake.

A fire ripped through a church in the Egyptian capital of Cairo on Sunday sending huge amounts of thick black smoke into the air as congregants worshipped, killing at least 41 and injuring 14, the Coptic Church said.

Two-time champion Simona Halep has advanced to the National Bank Open's final. The Romanian beat Jessica Pegula of the United States in the WTA event's first semifinal on Saturday.

A delegation of American lawmakers is visiting Taiwan just 12 days after a visit by House Speaker Nancy Pelosi that angered China. China responded to Pelosi's visit by sending missiles, warships and warplanes into the seas and air around Taiwan.