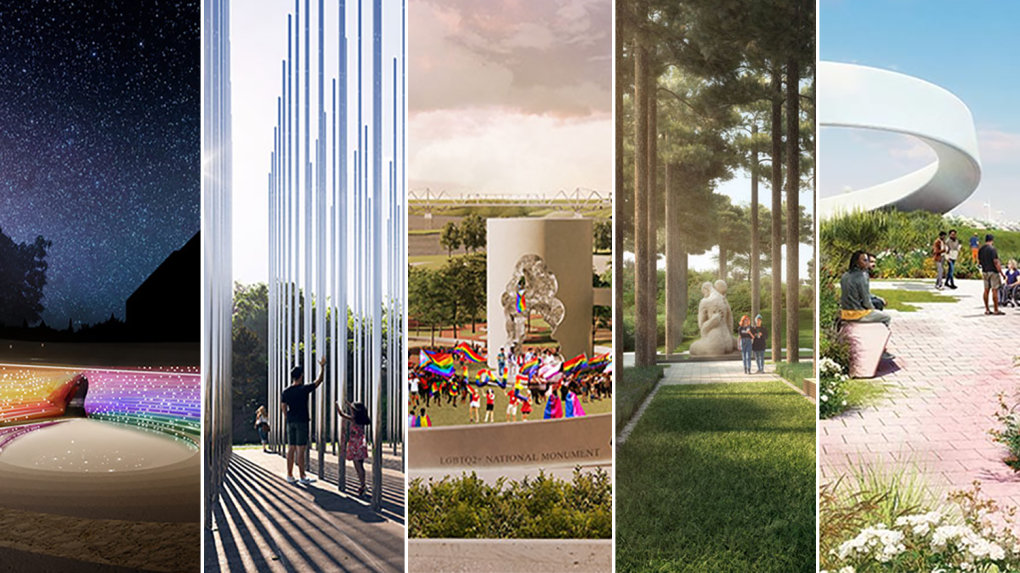 A collage of conceptual designs for the proposed LGBTQ2+ National Monument, set to be built in Ottawa by 2025. (Ministry of Canadian Heritage)

Five designs have been shortlisted for the monument, which will be built on land between Wellington Street and the Ottawa River, near the Portage Bridge. The monument is scheduled to be completed in 2025.

According to a press release from the Ministry of Canadian Heritage, The LGBTQ2+ National Monument will "tell the story of generations of LGBTQ2+ people in Canada who have been persecuted, abused, dismissed and marginalized because of who they love and how they identify."

The monument will honour Canadians affected by the "LGBT Purge," a time when lesbian, gay, bisexual and transgender Canadians were actively discriminated against and systematically forced out of jobs in the Canadian Armed Forces, the RCMP, and the federal public service. The site would also serve to "educate, memorialize, celebrate and inspire diversity and inclusion in Canadian society."

The estimated $8 million cost of the project will be covered by the LGBT Purge Fund, a non-profit corporation established in 2018 to manage funds provided for the settlement of a class action lawsuit between the federal government and members of the LGBT community who were employed by the Canadian Armed Forces, the RCMP, and the Canadian federal public service.

“I hope LGBTQ2+ communities will feel that some or all of these designs express the pain the community has experienced while instilling pride and hope for the future. I would like to thank all the design teams that applied to this competition and wish them the best,” said heritage minister Pablo Rodriguez in a press release.

Michelle Douglas, executive director of the LGBT Purge Fund said, "The five proposed designs for the LGBTQ2+ National Monument are inspiring, creative and powerful. The LGBT Purge Fund is grateful to the design teams for answering the challenge of realizing the vision for this monument and for creating such evocative designs that tell the story of discrimination against LGBTQ2+ communities in Canada. We are now at an exciting stage in the process where we need to hear from people across this country. We want as many people as possible to have their say on these designs and be part of the next chapter of this story.

The survey will be open until Nov. 28, with a jury of experts in the fields of visual arts, landscape architecture, architecture and urban design, as well as LGBT Purge survivors and other stakeholders considering the survey responses as part of selection process.

Nov. 28, 2021 also marks four years since Prime Minister Justin Trudeau delivered his historic apology in the House of Commons to the victims and survivors of the LGBT Purge.

The winning design will be announced in 2022.