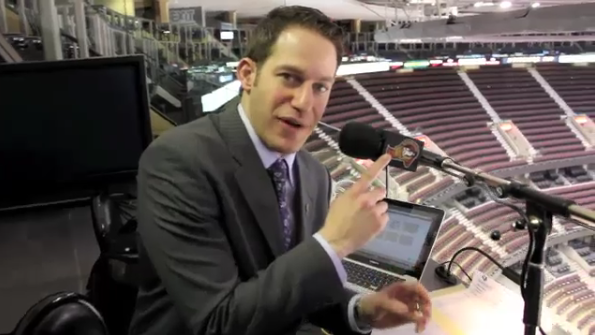 Stuntman Stu has announced he is stepping down as PA announcer for the Ottawa Senators. (CTV Ottawa file photo)

There will be a new voice calling the goals at the Canadian Tire Centre the next time the Sens take to the ice.

MAJIC 100 host Stuntman Stu Schwartz has announced he has stepped down as the PA announcer for the Senators, effective immediately.

“Last night was my last night behind the mic for the Senators,” Schwartz told his MAJIC Morning Show audience Friday. “It hasn’t been an easy decision to come to, but it’s one that’s best for me and my family.”

Schwartz was hired as PA announcer in 2006 and called it a dream come true.

But he says, since his leukemia diagnosis in 2016, he hasn’t been able to call goals like he used to.

“The act of burning the candle on both ends isn’t something I can do anymore,” he said.

Schwartz thanked the players, the staff, and the fans of the Senators for all of their support over the years, through good times and bad.

“You’re a passionate fan base,” he said. “Don’t ever lose that and don’t ever take for granted how lucky we are as a city to have an NHL team in our backyard.”

Schwartz says he will continue to be active with the Senators and the Sens Foundation at events, but he’s looking forward to a new experience.