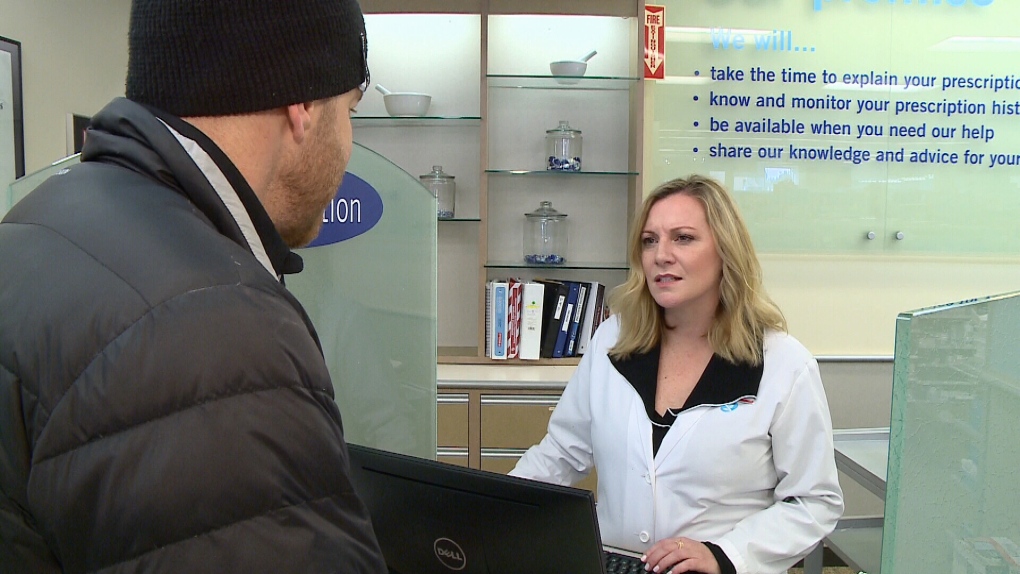 It was two years ago this week that Majic 100 morning co-host Stuntman Stu was diagnosed with leukemia.

He announced it on Facebook and the video went viral.

Now, another video is going viral; this one highlighting the pharmacist who Stu says saved his life.

There were a lot of people on the road to Stuntman's Stu recovery: those who donated blood, the nurses and doctors, of course.

But it was a chance meeting with an Ottawa pharmacist who Stu now calls his guardian angel.

“Darn right we're going to beat this, we will we will beat this. “

That was Stuntman Stu on this very day two years ago in a CTV Ottawa news story,in hospital after discovering a day earlier that he had leukemia.

Today, Stu is back at a Shoppers Drug Mart on Prince of Wales in Ottawa’s south end,

Hugging his pharmacist.  That may seem a little weird but not when you hear why.

“You saved my life and I can't thank you enough,” he says. To Shauna Devison, a pharmacist featured in an on-line video, shot by Shoppers Drug Mart to recognize her work.

“He listed off his symptoms and I knew then it was really bad to be honest with you,” Shawna says in the video.

“She looked at me and said you have to go to the emergency room now.”  Stu is in the video as well.

It was February 15, 2016.  Stu just happened to stop at the drugstore looking for Vitamin D.  He hadn't felt well for weeks. Shauna, who wasn’t even supposed to be working that day, was behind the Consultation Counter.  She asked him why he wanted Vitamin D, what he had been experiencing.

“I had a lot of nosebleeds the last couple of weeks,” Stu recalls saying, migraines, extreme fatigue and bruising in my hand.”

Shauna asked him if he had seen his doctor yet; Stu had made an appointment for that Wednesday.

“Everything he listed off,” says Devison, “and there was honestly a look in his face that deep down he knew something was really wrong.”

“This is the woman who encouraged me to go get help,” says Stu, “and if I hadn't listened to her, I wouldn't be here today.”

After time off for treatment, Stu has been hard at work.  He popped in to the pharmacy a few months ago just to say thanks.  Shauna had been off too undergoing treatment for breast cancer.

“So I was diagnosed 10 months after Stu was,” she says, “which is kind of ironic.”

“I made the mistake of googling my symptoms and it wasn't until I came in here, that I got advice I needed.”

“We are here, we are the most accessible health care profession,” Shauna says, “so come see us.  We are not just behind a counter counting pills.  We have the clinical knowledge to help you make the determination whether you need to the emergency room or whether you can wait to see your family doctor.”

For Stuntman Stu, he's convinced that decision saved his life and earned him a friend for life.