Crews from Environment and Climate Change Canada and Western University’s Northern Tornadoes Project are investigating to determine whether tornadoes are responsible for damage across eastern Ontario following storms on Sunday.

Two NTP teams will travel to the region N of Belleville, ON tomorrow to conduct ground / drone surveys in the Havelock / Hwy 7 / Kaladar area. It appears one or more tornadoes have caused extensive damage there.

A powerful thunderstorm moved across the province Sunday evening. According to Environment Canada, homes and trees were damaged in areas that include Havelock, Marmora, Madoc and Tweed, which are east of Peterborough and north of Belleville. Part of Highway 7 in Tweed was blocked because of a downed tree. North of Tweed, in the community of Actinolite, roofs were ripped off of homes.

The municipality of Tweed has declared a state of emergency. A reception centre is open at the Tweed Library at 230 Metcalf St., with bottled water. Power is available.

"If you have been affected by the storm, please register at the reception centre. If you have questions, please call the municipal office at 613-478-2535," the municipality said.

Environment Canada said injuries were reported in the community of Rockdale, Ont., about 60 km north of Belleville.

Tornado warnings were issued for parts of the region Sunday night.

“Officers were responding to numerous calls for service from about 8:30 until 4 in the morning,” she said. “Lots of trees were reported down on roadways, especially on Highway 7 between Highway 62 and Highway 37. Also, hydro lines were down, so a lot of vehicles were halted in the wake of that.”

Cranton said OPP is aware of one report of non-life threatening injuries to someone who was driving on Highway 7 at the time of the storm. A downed hydro line hit one OPP officer’s vehicle, breaking the windshield and mirror. The officer was unharmed, Cranton said. 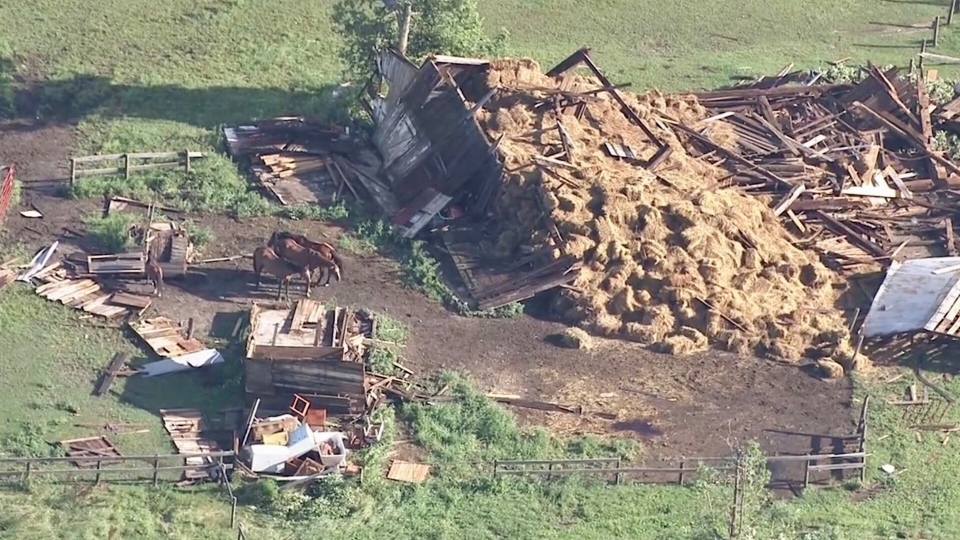 Deputy mayor of Madoc Township Larry Rollins told Newstalk 580 CFRA's "Ottawa Now with Kristy Cameron" that this is the second devastating storm in the region this year.

"We had a major storm in May that caused all kinds of tree damage, as it did in Ottawa," he said, referring to the May 21 derecho storm that caused widespread damage across Ontario and several deaths.

Rollins said people need to be ready for more events like this.

"People have got to realize climate change is real. This is no joke, this is for real and people better get used to it because until we do something different, we’re going to have a problem."

He says road and fire crews are working to remove downed trees from roads to help ensure that ambulances can reach everyone.

"Most of our volunteer firemen were out last night after the storm hit and worked through the night. People are still working today trying to open all of our roads," Rollins said. "We hope that by this evening, we will have all our roads open."

Hydro One said Monday afternoon that it had restored power to more than 39,000 customers since Sunday night, but some people would remain without power for another night.

Crews have restored power to 39,000 customers since Sunday’s #ONStorm. We anticipate some customers in the hardest hit areas may be without power overnight. We understand how difficult it is to be without power and thank you for your patience. For updates: https://t.co/JCZXRIEpK4 pic.twitter.com/vhcGCrsxmM

CTV's Nate Vandermeer says he recorded nearly 90 mm of rain in the Brockville area on Sunday.

Ottawa was drenched with more than 22 mm of rain, and lightning is getting the blame for damage to the O-Train, which kept trains offline for the morning commute.