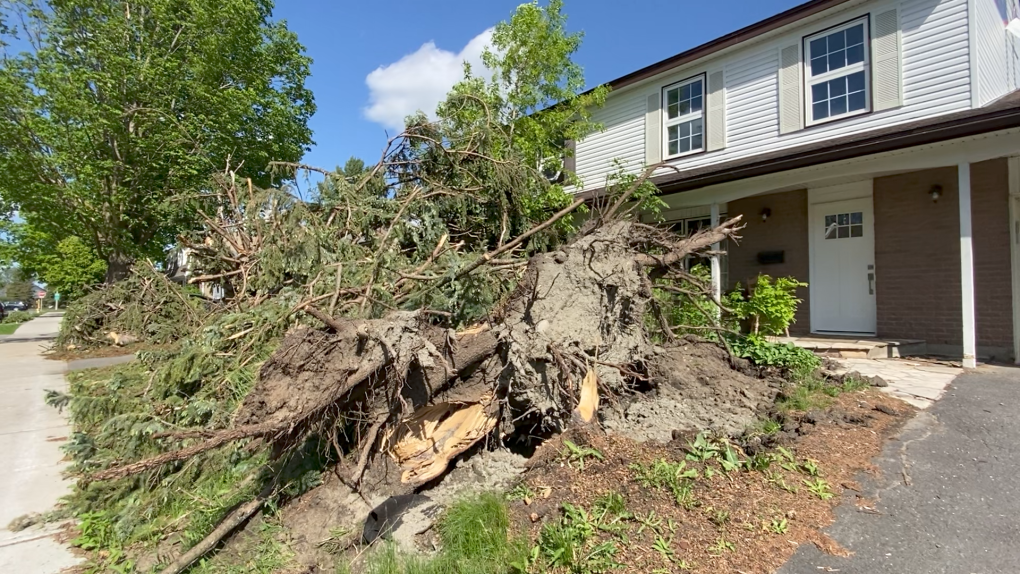 It’s been one week since a devastating storm swept through the nation’s capital, knocking out power to tens of thousands of people.

As of Saturday evening, around 18,000 households and businesses are still in the dark.

In a South Keys neighbourhood, trees are toppled and tarps cover roofs.

"I’m not sure what’s happening," said Stacey Ottley, a resident with a home that was badly damaged in the storm. "It’s been very disappointing and it’s been over a week of no power."

People are trying to manage a costly clean-up as they also deal with no power or hot water.

“We have insurance, but it’s still pricey because we have to pay the arborist up front and that’s $1,400 an hour because it’s an emergency,” she said.

Hydro crews are stationed throughout the city as they focus on the hardest hit neighbourhoods.

"This was such a widespread hit to our city," said Joseph Muglia, Hydro Ottawa’s director of system operations and automation. "There’s a tremendous amount of trees on wires and broken poles that we are still dealing with."

As Hydro Ottawa enters the last phase of restoration, there’s a goal, but no firm commitment on restoring power by the end of the weekend.

"That’s our goal and certainly reducing that number right down to zero as much as we can, that’s certainly our goal," said Muglia.

The damage is widespread as people rely on generators for power.

“For all hours of the day and most of the night as well, there’s generators going on,” said Shira Schwartz, an Ottawa resident.

The City of Ottawa was handing out storm clean-up kits on Saturday, for residents in need.

"I decided to grab a coffee, charge up and I thought I would get a kit just to help out some neighbours in the area," said Michelle Optis, who has been without power for eight days.

Helping others is a welcome distraction for Optis as she continues to deal with a very challenging and draining situation.

As city workers continue to go from street to street to remove the storm debris, it’s clear this will take weeks.

Crown counsel is seeking to revoke the prior order that granted bail for Tamara Lich, an organizer of the 'Freedom Convoy,' and says he will argue for her to be detained.

The gunman who attacked an Independence Day parade in suburban Chicago fired more than 70 rounds with an AR-15-style gun that killed at least six people, then evaded initial capture by dressing as a woman and blending into the fleeing crowd, police said Tuesday.

The Bank of Canada's strategy of rapidly increasing its key interest rate in an effort to tackle skyrocketing inflation will likely trigger a recession, a new study from the Canadian Centre for Policy Alternatives (CCPA) says.

As passport processing delays and long lineups persist at Service Canada offices, the federal government is looking to buy 801 chairs for people standing in line by the end of this week.

Dressed in Indigenous regalia, National Chief RoseAnne Archibald strode into the annual Assembly of First Nations gathering in Vancouver ahead of a group of chanting supporters on Tuesday. Just the day before, Archibald said she had been 'erased' from the agenda after her suspension in June. Instead, she led opening ceremonies and welcomed attendees in her opening address.

What we know about the Highland Park shooting suspect

With doctor shortages causing emergency rooms around the country to shut down, a northern Ontario hospital is scrambling to stave off the same fate.