Stolen Hydro Ottawa van slams into concrete barrier, flips on its side at University of Ottawa campus 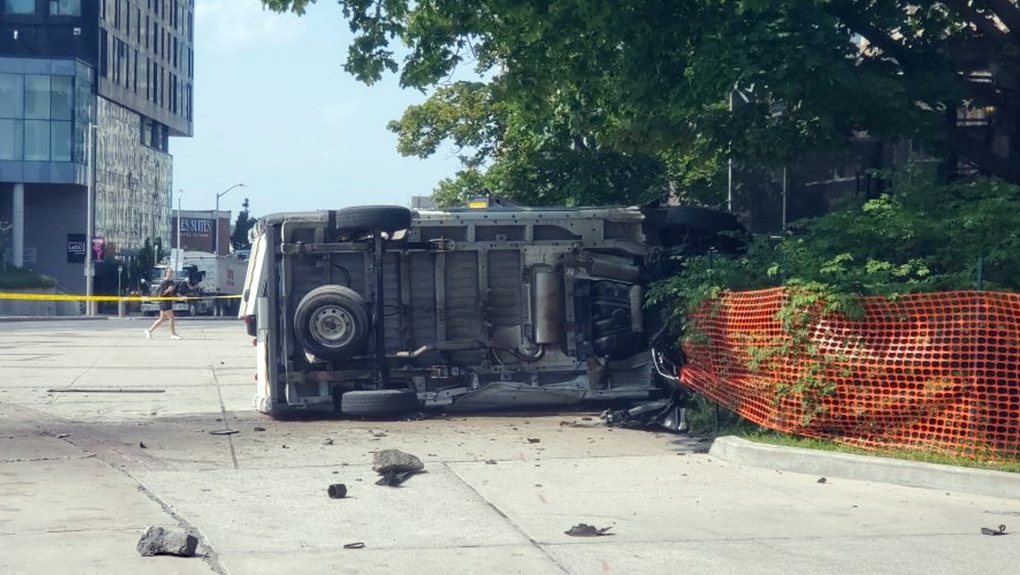 A driver fled the scene after a van crashed on the campus of the University of Ottawa. (Aaron Reid/CTV News Ottawa)

OTTAWA -- Ottawa police say an Ottawa man is facing charges after a cube van slammed into concrete road barriers at the University of Ottawa and flipped on its side at the start of the Monday afternoon rush hour.

Police were called to the single vehicle crash in the area of Waller and Nicholas streets at 2:45 p.m. The driver of the van fled the scene after the crash.

Witnesses say the Hydro Ottawa van was going at least 100 km/h when it travelled through the intersection and into a concrete barrier.

Photos show the cube van on its side near the University of Ottawa's buildings. A concrete barrier blocking traffic was damaged, with pieces of concrete spread across the road.

The owner of the van told CTV News Ottawa’s Christina Succi the vehicle was stolen.

Just before 5 p.m., police said the driver of the vehicle was located by officers, and transported to hospital for treatment.

In a statement to CTV News Ottawa, Hydro Ottawa confirmed its vehicle was stolen, and later involved in the crash at uOttawa.

“An investigation into the events has been launched by Ottawa Police Services and Hydro Ottawa,” said a Hydro Ottawa spokesperson.

The victim was released from hospital last night.

#MORE This was the immediate moments after the crash, where a man could be seen fleeing the scene, as bystanders attempted to assist.

The driver of this vehicle tells me the man running from the scene stole the van from him. #ottawa #ottnews pic.twitter.com/VjlQ0o7nQM

Unbelievable scene at Mackenzie Bridge and Waller - a stolen van was crashed at a very high speed into this concrete median at the University of Ottawa campus. It’s a miracle no one was hurt or hit. More to come. pic.twitter.com/GVYsqmpU0u