Stolen eggs & cash: When the honour system isn't all it's cracked up to be

BROCKVILLE, ONT. -- Produce stands are a staple in rural Ontario, with farmers selling fruits, vegetables and eggs at the ends of their driveways.

Mike Somerville of Simerville Farm, north of Smiths Falls, has been selling eggs by the dozen out of a cooler off Rosedale Road North, and using an "honour box" for payment.

"It's a county, time-honoured tradition," said Somerville under the midday sun.

"You have a stand, and there's usually a change pot there. You come by, prices are listed, you take what you want, you pay for it and you leave."

He's only had one issue with the honour box. It happened almost 2 months ago.

"I came out in the morning to put eggs out in the box and collect money from the previous day and the box was empty," said Somerville.

"They left the ice packs and the Tupperware container," he added.

Then, last week, it happened again.

"It was empty. I normally put out almost 20 dollars worth of change, a couple five-dollar bills and toonies and loonies, in case people don't have exact change."

Angry, he took a picture and posted it to social media. It quickly spread. 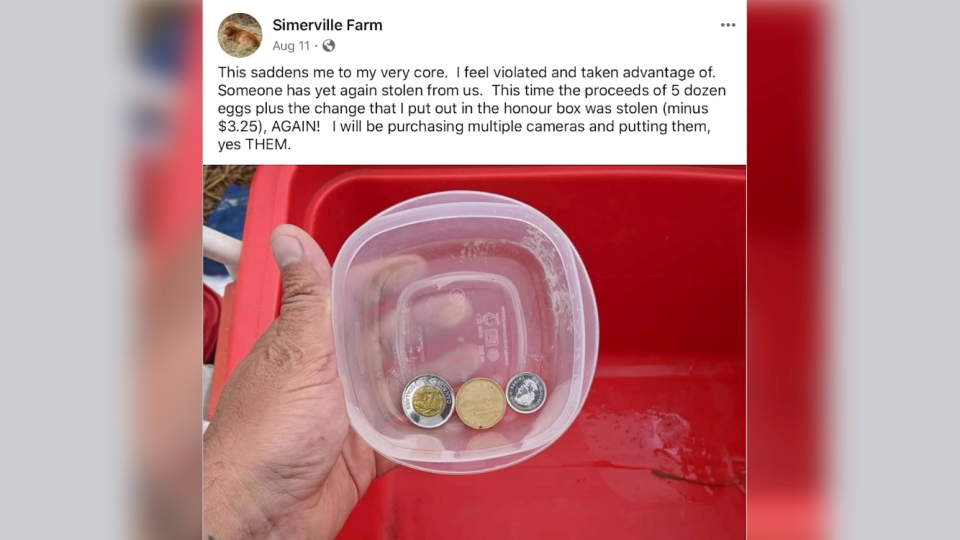 "I didn't think it would reach past a 10 kilometre radius, let alone out as far as it has to Perth, Ottawa and to Orléans. People from Hamilton and St. Catharines contacted me, just wishing well and expressing their displeasure," Somerville said.

Other farmers have experienced the problem, but sometimes the produce goes missing and the cash stays.

Luckily, for Brandy Jackson of Flycreek Farm, north of Brockville, it hasn't happened at her stand yet.

"Everyone has paid and been honest," Jackson said. "There have been a couple instances where they couldn't pay and they left a note saying we'll bring cash tomorrow saying they wanted the item today and that's fine."

And they did return the next day and pay.

Jackson even accepts e-transfer at her stand and feels upset other local farmers are having the problem.

"I think that's awful that anyone would steal produce or steal from farmers in general," she said. "I can't believe it happens but I have heard of it happening. It's really too bad. It's just like a store. You wouldn't steal from Walmart or the Superstore. You pay what the price is and take your items."

Back near Smiths Falls, there is now a note in the cooler at the end of Somerville's lane.

"It says, if you're hungry, come to the farmhouse. I will feed you. If you want to work, I've got work. I will pay you, no problems. I need the help, you need the help, let's help one another," Somerville stated. 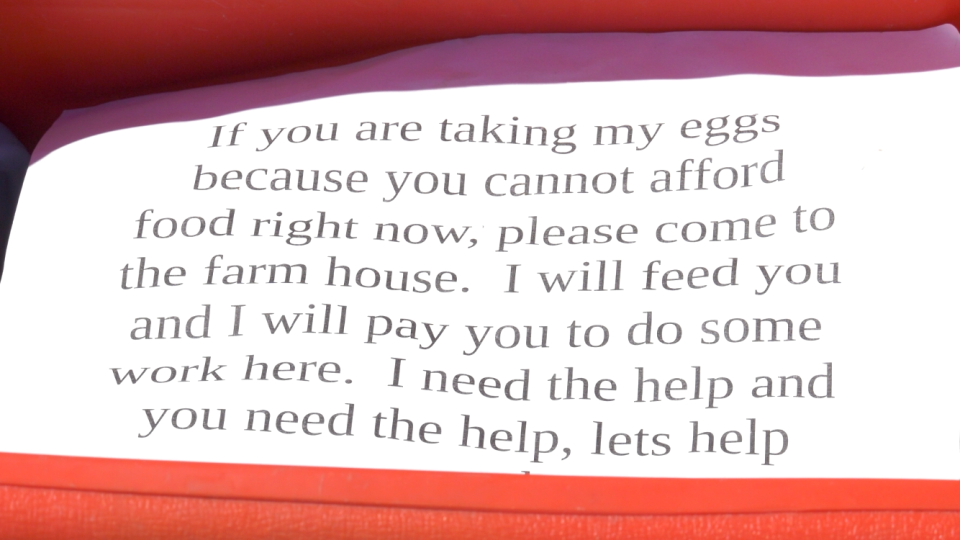 "I've put up some trail cameras. I really hate the fact that I had to do that but unfortunately it's something that needed to be done," he said.

"I've checked the footage a few times and its just what I expected: honest people coming in and buying eggs, paying for them and leaving," he said.

As for the thief?

"I think that with the reaction that's happened, whoever has done it is probably embarrassed and it won't happen again, at least not for a long time, I hope." he added

He will continue with the honour box.

"Country life is simple; it always has been and it always will be. I love doing this. I love the honour system. It's just the way to go. I just really like it and it makes sense to me."